No, not fungi this time – but another type of plant which has many gardeners feeling pretty uneasy. Including me, though I can’t help but be fascinated in a gruesome sort of way.

These little triffids were in the behind-the-scenes glasshouses at Kew, where I went the other day on a press trip (along with EmmaT, though she didn’t know it at the time). We got to the glasshouses right at the end of the day, which was a bit of a shame, as they were fascinating – they house some of the rarest plants in the world, some recreated from DNA rescued from the last remaining live bit of the last remaining and otherwise non-viable seed from a plant extinct in the wild. That sort of thing.

Anyway, these aren’t that rare, or at least not to the carnivorous plant cognoscenti, but were kicking about on a shelf in the main corridor that runs through the glasshouse. The above is a Nepenthe ampuliaria, a relative pussycat in the carnivorous plant world – merely drowning the odd bluebottle or two for tea. 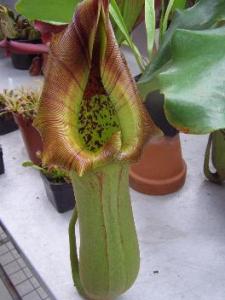 This, on the other hand, is Nepenthe truncata. Don’t stick your fingers in here, whatever you do. Or any other part of your anatomy. That tube is nearly a foot long, and half-filled with digestive juices. This plant eats mice. 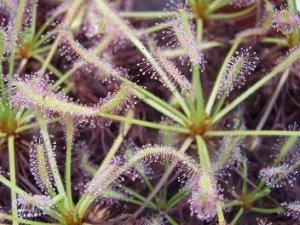 As if to prove that these little green monsters do have some horticultural merit, here’s a sundew (Drosera) – I didn’t get the full plant name, but it’s a pretty little thing, isn’t it? So long as you don’t think about the fact that all those charming droplets are actually stomach juices.

Now, never mind the Hallowe’en-ish feel of this particular post – here’s something that’s genuinely, bona-fide useful. I think it’s Pinguicula x kewensis but don’t quote me on that – it didn’t have a label that I could find. Anyway, not only does it look approximately like a normal plant even though it’s actually carnivorous – it’s a handy biological pest control. Kew pop these all over the place in their glasshouses as little whiteflies and red spider mites can’t tell the difference between it and something less deadly – so they land on the leaves and are promptly dissolved and digested. Apparently they keep the glasshouses clean of pests without a spray can in sight. And they’re pretty, too. If a little scary.