Time to wake up the blog again!

I know: it’s been a long time. What can I say: writing and gardening got in the way. I won a Proper Award from the Garden Media Guild, for a year-long series I did in 2018 for the RHS magazine The Garden all about gardening without plastic: a cause that is now so close to my heart that I set up a whole website dedicated to it (with an equally neglected but soon-to-be-revived blog) at http://www.gardeningwithoutplastic.com.

I have raised a lot of vegetables, written another series for BBC Gardeners’ World magazine about growing food for your family (another cause that’s close to my heart) and seen my eldest daughter off to university in Newcastle.

I have gained a cat and lost 12 sheep: last year I sold my beloved flock of rare breed Dorset Down ewes, mainly because I really couldn’t justify producing that much meat when there are now only two of us to eat it and we’re mostly vegetarian anyway. They went to a very nice man in Dorset where they now live in splendid luxury in a little paddock where they are fussed over by all who pass.

But now it is the start of a new decade and I am feeling the itch to record what I am up to in the garden again. There is much to talk about: a rewilding project, rebuilding the chicken run in preparation for restocking after a couple of years’ break, experiments with exotic vegetables from far-off climes…

But first things first: before you bring in the new, it’s out with the old, and I’m having a big clear-out. As a garden writer I accumulate a lot of packets of seeds. Though I try to sow as many as I can myself, inevitably there are some left over.

I’ve done one of these seed giveaways before but not for a while now. So the stash has grown to epic proportions. Time for a bit of a declutter, I think.

Here are the rules:

List of available seeds (I will update this as we go along):

All seeds are in date and in a sealed packet ready to go. This giveaway will run until the end of January (or longer if it’s still going strong beyond that point). Enjoy! 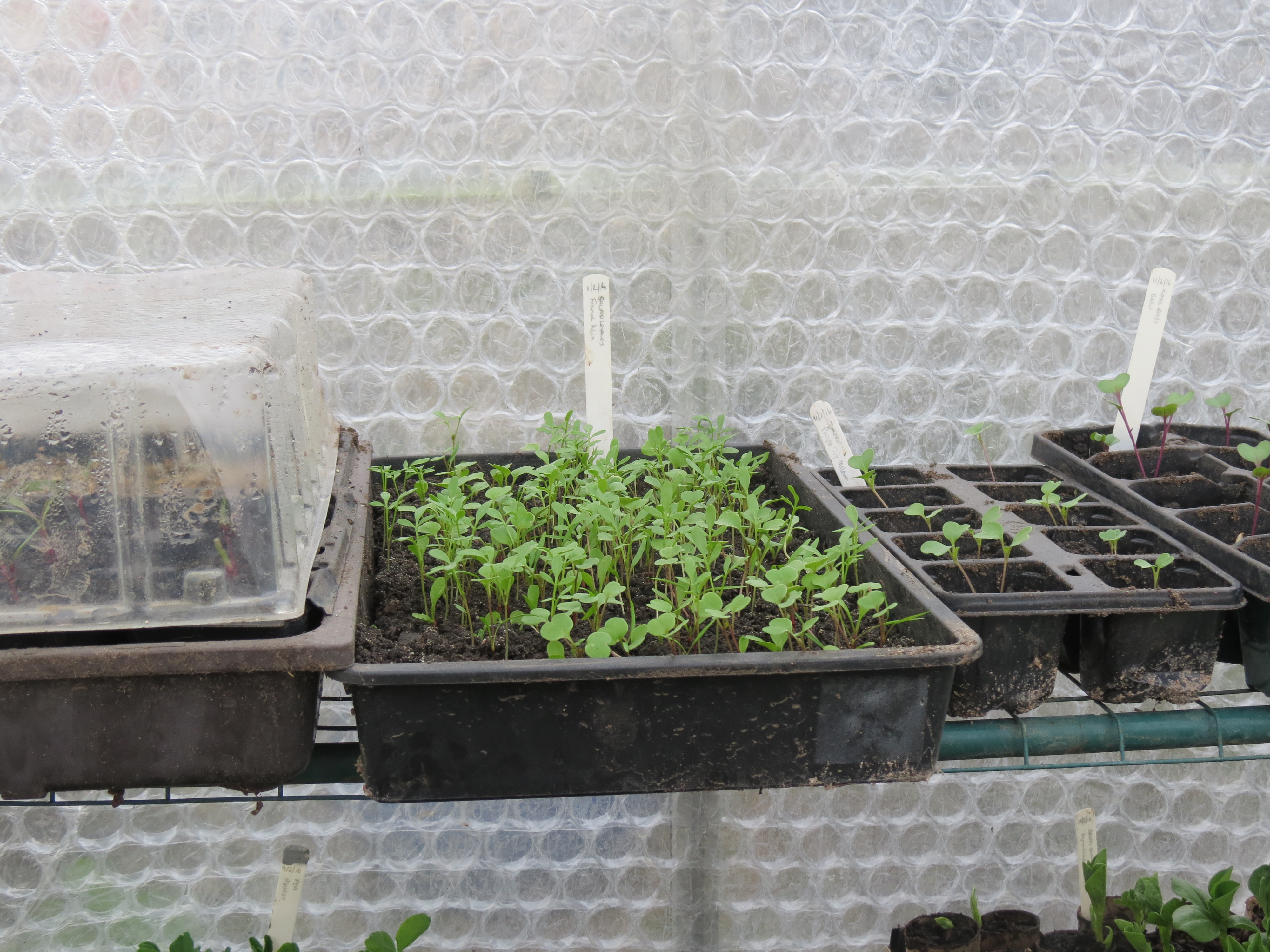 Seedlings coming along nicely! Here’s the tray of mixed salad seedlings I put in at the beginning of February. Alongside them are beetroot, turnips, kohl rabi and early peas (Meteor).

Generally speaking it’s a bit early to be sowing just yet – even in a greenhouse (there’s been the occasional frost on the ground in the mornings this week: I’d almost forgotten what it looked like).

But this year I’ve been trying a new regime and it’s worked a treat.

I set the propagator – my beloved Vitopod – to 12 degrees, optimum for germinating hardy seeds. Then the moment they emerged, I shifted them out of the propagator onto the shelving in the open greenhouse. This is kept a tad above freezing, so regularly (especially lately) falls to about 2-3 degrees.

That means the seedlings grow ‘hard’ – developing protection against the harsher, colder conditions so they become sturdier, shorter and stronger. They’re perhaps a tiny tad more spindly than seedlings started later in spring, but nothing like they have been in previous years when I’ve probably cossetted them a bit too much. 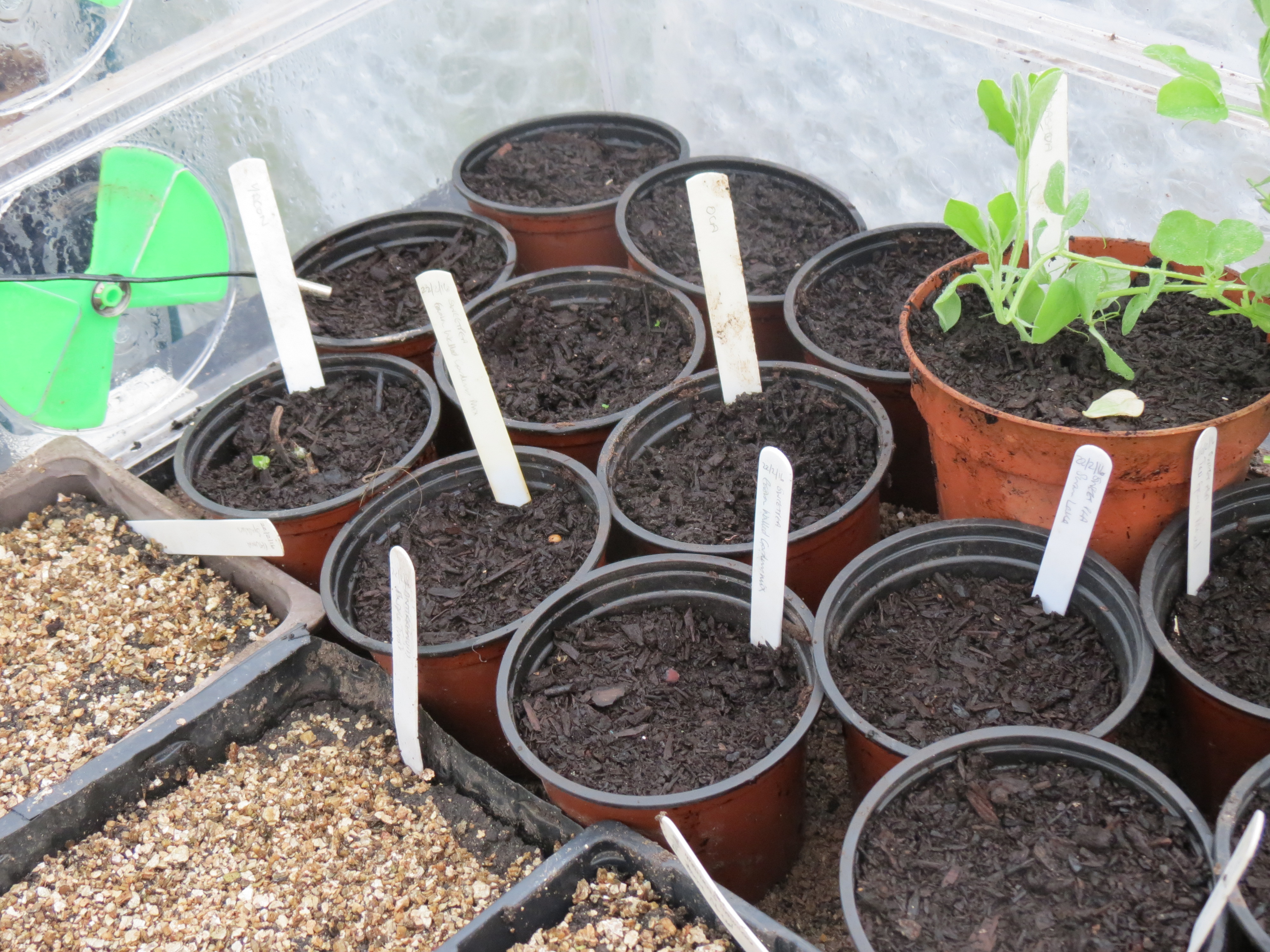 Back in the propagator and the heat has been turned up to 18 degrees: it’s now the turn of tomatoes, half-hardy annuals and a whole slew of exotica including mashua, yacon and oca. Plus Chinese gooseberries and gherkins. I do love this time of year! 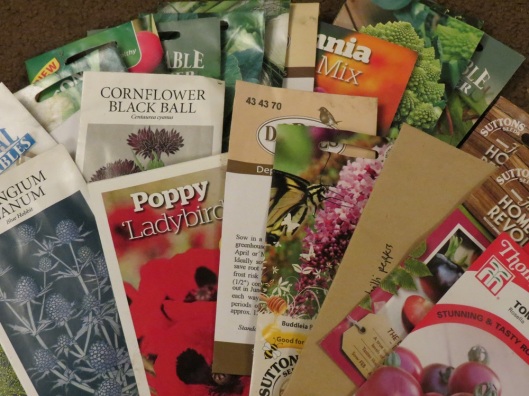 While we’re on the subject of seeds…

The imminent arrival of my little package of heritage seeds from the HSL has prompted me to have my annual clear-out.

I do this every year: the routine goes 1) throw out any seed packets more than two years old 2) throw out carrot and parsnip seed regardless (I buy these in fresh each year – better germination rates) 3) put aside seeds to give or swap with other gardeners.

And then of course 4) go get loads more seed!

Since I’ve now reached stage 3, and it’s coming up to Christmas which seems a nice time to start giving people stuff, I thought it was about time I revived the annual CG Big Seed Giveaway (last held in 2013 when I was still sane and my schedule hadn’t been hijacked by 48,000 words and a book publisher).

So first come, first served: get your free seeds here!

How to claim your free seeds: 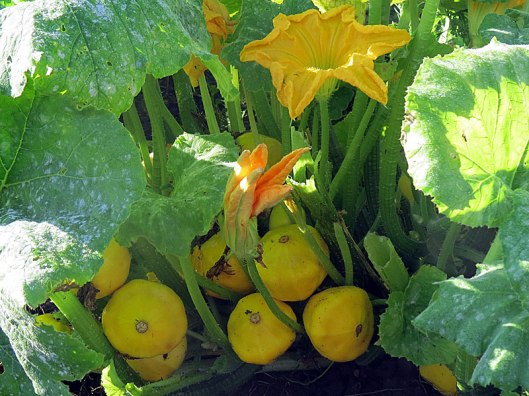 These are this year’s patty pan squash

They’re a little bit odd. I’ve grown yellow patty pans before: and they were like miniature flying saucers, about 8-10″ across and beautifully scalloped at the edges.

They reach this size – about 4″ across – make a half-hearted attempt at the scallop thing and then go rotten.

I shouldn’t complain really: they’re very prolific as you can see, so make up for lack of size with quantity. They’re nice and firm (before they go soft) and tasty: I cut them up skins and all and use them just like courgettes.

But yellow patty pans they aren’t. I now think I got a duff batch of seed. 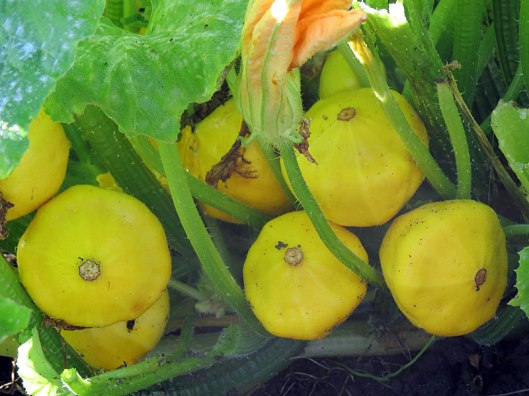 This happens more often than you’d think. One year I bought three plug plants which were meant to be melons: two of them were, the third turned out to be a pumpkin. You can’t actually tell the difference just by looking at the seedlings: it was when the flowers appeared that the truth was out, but by then it was a massive behemoth bidding for a greenhouse takeover.

I planted three hydrangeas this spring in a client’s garden which were meant to be ‘Mariesii Perfecta’ – a seductive smokey-grey-blue lacecap so beautiful you can’t quite believe it’s real.

What has flowered is a horrid candy-pink half-mophead, half-lacecap which looks like a reject from a failed hydrangea breeding experiment. It’s dreadful and rather embarrassing since I had talked the owner into getting ‘Mariesii Perfecta’ instead of the ‘Annabelle’ she had originally suggested.

The list goes on: limp ‘Lollo Rossa’ lettuces in a washed-out half-green instead of the crisply ruffled burgundy purple they’re meant to be; winter super-hardy supposedly January King cabbages which are not properly savoyed and worse, mature and over by September; ‘Electric’ onions more pink than red.

I don’t know whether seed companies are getting complacent: perhaps they’re assuming we don’t know enough about our varieties (or care, perhaps) to be able to tell the difference.

Or maybe it’s us: I haven’t yet complained about the hydrangeas, though I know I should have my money back or perhaps three Annabelles to replace them. And if I did complain at least the plant producers would know I actually noticed and cared.

Something is undeniably a little amiss with the supply chain here, and it worries me: if you don’t get the right thing in your seed packet (or plug plant tray) and you don’t know, then you’ll always have a skewed idea of what home-grown vegetables (or plants in general) should be like. It matters for future breeding, as muddied gene pools are not good for predictable results. And it matters just because when I buy a certain type of lettuce I have chosen it for the properties it’s supposed to have – not some diluted hybrid mishmash.