I know frost is meant to be the gardener’s enemy. I, like no doubt many others in the vicinity, spent much of yesterday running around frantically squirrelling things away in my greenhouse as the weather forecast got gloomier and gloomier. This morning, I still found I had several casualties when I woke up to find it went down to minus 2 or so. But oh… it was so beautiful.

This was one of my casualties – the Nicandra physaloides, now reduced to a sodden mess in the corner. But didn’t it look lovely as it died.

I thought this Goliath poppy was being a bit optimistic, producing flower heads this late in the season!

Verbena bonariensis is, I often think, at its best after a good frost.

The frost melted pretty quickly but even that sent me into rhapsodies – this is Melianthus major which holds onto the droplets like jewels. The little spider was up early, too.

Another one that’s looking good as the frost melts off it – this is Eucalyptus gunnii, kept coppiced for that glaucous, rounded young foliage. 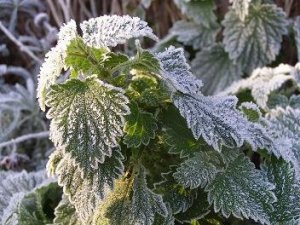 And even the nettles were pretty. It doesn’t get much better than that.

Guess what I spent my weekend doing…

After my little bit of inspiration over the twin evils of a shed in the wrong place and a nasty little problem spot, there was no point hanging around really so I got out the tools and got to work.

First job – dig the whole area out to a spade’s depth (getting rid of all that borage in the process) and put down a nice clean layer of weed suppressing membrane. Lo – the problem area is no more.

Next, after those nice people at Wickes delivered a load of building materials, it was barrowing a couple of inches of hardcore (actually the same stuff road builders use so it can’t be bad).

That was the (relatively) easy bit done – then I had another couple of inches of sand on top of that: 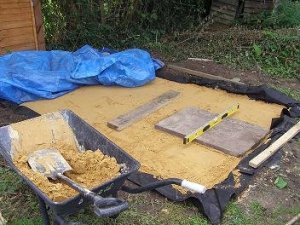 …and the tricky bit was getting the horribly heavy paving slabs down. These were recycled from the paving slabs that were alongside the shed already, which seemed like a good idea until I realised how damned heavy they were. They were the kind you use for pavements – great for settling down and not moving anywhere without a small bomb beneath them, awful if you do actually want to move them somewhere. I did my best – it wasn’t quite patio standard, but it was OK for a shed base, and looked pretty good by the time I’d finished. 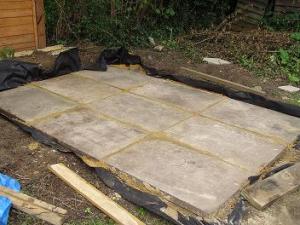 Then the fun bit – ta-da! One minute the shed was over there – the next, it was over here!

The tarp is because we managed to tear the (already gently rotting) roofing felt while we were moving it, but no matter, we have another roll in the shed which we’ll finish it off with next week.

I’m dead proud that we got it all done – but don’t be deceived by the “before and after” pics above: this was a long, sweaty, difficult job, especially the moving-the-shed bit which involved a lot of swearing and entailed dismantling the entire building and reconstructing it over a period of several hours. However – it’s also a job well done: we discovered a rat’s nest underneath where the shed used to be, since they hadn’t gone to all this trouble and had just put the shed on fence posts laid on the ground. Ain’t no rats can get through this lot, I guarantee…!

This is my shed.

Yeah, yeah, I know, well we can’t all have quirky interesting sheds. I’ve actually got another shed too, up at the allotment, which is both quirky and interesting so maybe it’ll find its way onto these pages before long just to prove this is Not My Style (honest).

Anyway. I inherited the shed with the garden, and as I was wittering on about recently, there were a lot of eccentric design decisions made by my predecessor in this garden – one of them being to place this shed plumb in the middle of the main view from the house. So when you look out of my kitchen window you see my lovely plants set against a gorgeous background of poo-brown shiplap.

Next bit. This is my Problem Area.

It’s actually right opposite the shed, a little further down, and all I can do with it is hack it back periodically as nothing will grow there. It’s under the deep shade of an overhanging cobnut tree (one of the more lovely aspects of my garden) and is a jungle of nettles, next door’s self-seeded pink buddleia and rampant borage. You quite often see this deceptively pretty plant sold both as plants and seed in garden centres, at which I invariably laugh hollowly and totter out weakly since I’ve been waging a running battle with it for nearly 7 years – mind you I’m winning… mwah ha ha ha….

Mmm. Well. Anyway. I have for quite a long time been eyeing the shed… then eyeing the Problem Spot… then eyeing the shed again… It’s an obvious solution. So today I started digging. You can just about see the fork (about to root out those bloody borage roots again) and the stakes marking out the spot in the picture above. It’s going to be a horrible job (the pic of the shed very wisely doesn’t include one of its contents – I don’t think I’ve seen the back wall since we moved in) but the results will be Step One in the great garden makeover. Wish me luck.