Our annual transmogrification into a nation of twitchers happens this Saturday and Sunday: it’s the Big Garden Birdwatch, organised by the RSPB and just getting bigger… and bigger.

In fact, for over 30 years it’s been the barometer of change, charting the effect of modern life on our most vulnerable garden friends.

Last year broke all the records again: over 600,000 people took part and spent an hour freezing their… ahem, noses off for an hour (remember the weather?) recording the birds which visited there.

This year, with a bit of luck, it’ll all be a bit more balmy and as long as the rain stays off we’ll have a much nicer time. I’m busy playing with some ponies on Saturday but am hoping to join in on Sunday.

Our garden is these days surrounded by proper old-fashioned hedgerows on all sides – five-star habitat for birds – so I’m hoping that we’ll be busy (a lot busier than the first time I tried it, anyway – that was a few years ago now but we were living in built-up Surrey suburbia at the time, the frost was thick on the ground and I nearly got hypothermia for the sake of one measly starling).

The RSPB encourages you to tempt the birds into your garden with lots of irresistible bird feed, baths and such like. And this gave me an idea.

I help out from time to time at the local youth club, which involves coming up with activities which the children might enjoy. So last week, we made bird feeders.

This has it all for kids: it’s wondrously messy, so simple even the littlies could join in, and dead cheap (we made around 20 bird feeders for all of four quid). So this week, set aside a little time with the small people in your life, suspend your misgivings where grease combined with birdfeed and your kitchen surfaces are concerned, and get stuck in for the best Birdwatch ever.

You will need:
– a block of lard, at room temperature: we found that a third of a one pound block of lard was enough to do each bird feeder
– bird seed: around two 1kg bags did our 20 feeders with some left over
– assorted containers. We used:

– string and scissors
– bowls
– plastic bags
– washing up liquid, for clearing up

1) Take your lard and with your hands, mush it up. This is a child’s idea of heaven and an adult’s idea of hell. But a messy child is a happy child, so take comfort in that expression of unbridled glee.
2) Tip a handful of birdseed into a bowl, and then mash the lard into it, mixing lard and birdseed well in together in a lovely greasy mushy splodge.
3) Adults, while this is happening, can be tying bits of string to whatever you’re going to make the bird feeder out of. We found a few techniques which worked:

4) Fill your bird feeder with the lard-and-birdseed mash. With pinecones, you’ll need to work it into the cracks between the open segments: once you’ve finished it looks like a ball. The holes in the logs worked beautifully, filled to the brim with mush: yoghurt pots and plant pots were simplicity itself to fill. Cram as much in as possible and smooth it off.
5) Place your completed bird feeder on a plastic bag in the fridge for the lard to harden again.
6) Then hang from your chosen tree, get out your RSPB identification chart, sit back and enjoy your annual hour’s birdwatching.

The cacti are back.

Three boxes of them plus a few loose ones; over 20 cacti of varying shapes and sizes, the largest up to your knees, the smallest the size of your thumb. And I hate the lot of them. 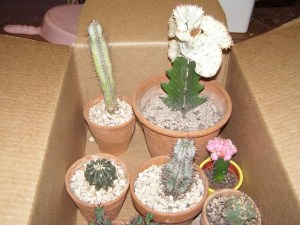 But don’t let the 11-year-old know I said that: these are her cacti collection, lovingly built up over about five years ever since somebody whose name shall ever be in my little black book bought her some benighted Echinocactus and she learned what entertaining effects it produced when people tried to dust it. I was under the misapprehension that encouraging an interest in cacti would eventually lead to a wider enthusiasm for gardening in general: but quickly learned that for an 11-year-old this is in the same bracket as acquiring Pokemon cards or Gogo Crazy Bones or Polly Pocket dolls, and has about as much to do with growing things.

Anyway, since then we’ve acquired a few Stenocereus, a Gymnocalcium (you can see that one in the picture above – it’s the one with the pink hat on) and a pale grey Pilosocereus (back row, far left). Among others.

I have tried to get enthusiastic about them: they’re plants, after all. I have actually seen some pretty spectacular displays of cactus: never in the wild, more’s the pity, but there’s a fine glasshouse full of beautiful mature specimens at Torre Abbey in Torquay which shows you what breathtaking effects you can achieve with them if you really try.

But the main rule seems to be, don’t have lots of squitty boring little plants in individual pots bristling along your windowsills. I don’t have a large display greenhouse going spare, so this is what I’ve had to do and 20 cacti fill a lot of windowsills. And apart from one or two headline-grabbing incidents when we actually got one to flower, they have looked exactly the same from the day we got them to now.

In the process of moving house I discovered something else about cacti: they’re like homing pigeons. You can’t get rid of them. We boxed up our collection and cunningly palmed them off on my mum, under some vague pretext that they might get damaged in transit or something (ha! I wish!)

My hopes that she would eventually fail to notice them as they mouldered away in a dusty corner – or, even better, leave them outside in the frost or something – were dashed. My mum probably hates cacti even more than I do, and she seems to have spent the intervening six months fuming in a well-mannered sort of way about having to babysit twenty of the blighters.

So the other day she finally dumped the lot in the boot of her car and drove them back to our house. They’re now glowering at us from where they have been rather unceremoniously dumped in the boot room while we have rows about what to do with them. 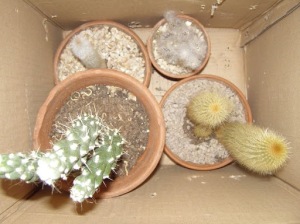 However I think I might now have cracked it. It’s a bit of a convoluted tale: we go riding every week or so at a local riding school, and a few weeks ago I was chatting to the lady who runs it about my gardening. She happened to mention that her dad was a cactus specialist – president of the local club, goes to shows, the lot. So I let rip about the boxes of cacti cluttering up my boot room and spiking anyone unfortunate enough to walk past: and she offered (on her dad’s behalf) to take them for me.

I couldn’t believe my luck. This lot are off on Saturday: I think if I discover her dad’s changed his mind they may accidentally find their way onto the muck heap instead.

A few are staying: the Opuntia, which has obligingly produced a nice baby…. thing…. out the side this year, has the 11-year-old’s initials carved in it from when she was six and first got it, so it’s a bit like a living toddler drawing. She couldn’t be parted from her beloved purple cactus – some sort of Euphorbia, I believe – as there’s one higher than your head in Wisley which we used to go and visit every time we went there.

And – now here’s a confession – I’ve actually kept one for myself. I don’t do houseplants as a rule – though they get very mollycoddled during winter, when I’m suffering gardening withdrawal symptoms, I totally neglect them in summer and can’t be bothered to water them. And then it makes me feel guilty having all these dead and dying plants kicking around the place.

Cacti and succulents give you none of these dilemmas: they just stay, exactly the same, for years and years whether you water them or not. If you happen to remember to water them regularly they grow quite noticeably, which is quite gratifying, but if you don’t, they don’t actually die.

So they’re really the only kind of houseplant I am capable of growing – a pity since I dislike them so much. However: I have found one I can live with. It’s the jade plant, Crassula ovata – common as muck, but not spiky and rather attractive in a succulent sort of way.

And the one we’ve got clearly knows that the time to sparkle at your very very best is when your owner is in a black chucking-out-cacti mood, as it’s chosen this very week to start flowering for the very first time. 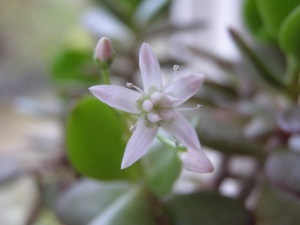 How lovely is that? When you water it the water emerges through the petals so they hang with dewdrops, too – just exquisite. I’d better make the most of it though: it’ll be another 10 years before it does it again.