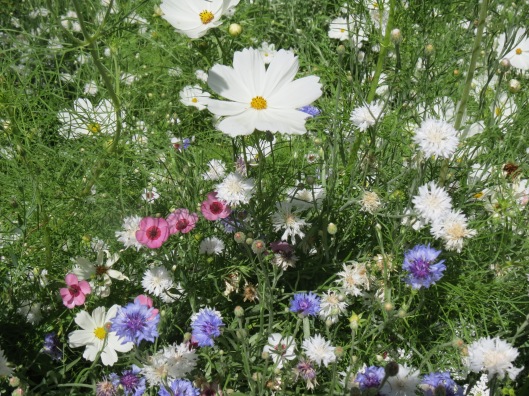 Well hello again! As always the summer has run away with me: three months since my last post, eh. I think that must be some kind of record.

I have been watching the swallows gathering on the telephone wire opposite and gibbering with rage (me, that is, not the swallows), quite quietly and only when nobody’s looking, at the unfairness of it all being nearly over. Last time I looked it was only just a little bit past spring. Then I got whisked up, Dorothy-like, into the summer. And here I am, back on the ground, no sparkly red shoes but quite a nice tan, howling at the injustice of winter.

I have travelled to France, twice: the picture is of some lovely and very un-French flowers at a garden we visited near Aix-en-Provence. The French, particularly in that bit of France, don’t really go in for flowers, or at least not in profusion like this: it’s more a sea-of-lavender followed by a sea-of-irises with a lot of clipped box and olive trees. Very beautiful, don’t get me wrong, but a bed billowing with cosmos and cornflowers was like a summer breeze in the middle of a southern European heatwave.

The garden has suffered a bit: I failed to pick over the beans, or the courgettes, before I left, so returned to some lumpy-bumpy and inedible purple French beans which have sulkily refused to start up again. The courgettes turned into marrows, which I have now cured and stored alongside the onion crop. It’s the best way, I find, of storing courgettes: beats freezing any day, though you lose a little of the flavour (but let’s face it, who cares about courgette flavour anyway: you’re just trying to find a way of using up the damn things). The plants, of course, have bounced back into action. I picked four more today. There will be four more tomorrow, too, I bet.

But I am, slowly, making progress: today I started my latest project, a raised strawberry bed. The mice nicked every last berry this year and I am determined to foil them. Plus the strawberry bed got invaded by couch grass and the strawberry plants were getting old anyway: so the whole thing needed an overhaul.

As usual, I am not sure quite when this is going to happen: I’d like it to be tomorrow, but I might not actually be here. I might be at Wisley instead, to look at the flower show and do a few interviews for my next article about the garden for The Garden (now doesn’t that sound odd). Or i might not. International woman of mystery, that’s me. With or without red shoes.

3 thoughts on “Raging against the dying of the light”