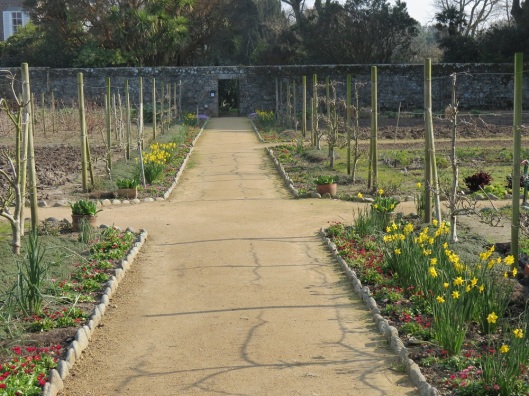 View down the main path, with espaliered fruit trees to right and left

You knew it wouldn’t be long before I got back to the food. My visit to Guernsey wouldn’t be complete without a look at its fine walled kitchen garden at Saumarez Park: a classic piece of Victoriana currently being lovingly restored by a team of 40 dedicated volunteers.

The Victorians knew what they were about when they enclosed great swathes of their gardens with high brick walls and created the classic kitchen garden. It creates an instant microclimate: the walls act like storage heaters for trained peaches, apples and pears, and the soil, enclosed neatly with paths, is easily tended. The whole becomes a workmanlike, industrious place of abundance, where veg production is the pinnacle of achievement: enclosing an area of the garden for one purpose and one purpose only does seem to focus the mind. 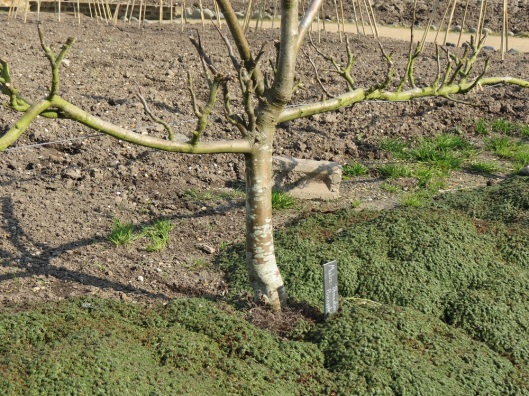 Of course in the days of the then Baron de Saumarez (there is still a Baron de Saumarez but the States of Guernsey own the manor nowadays) there was enough money washing around to have a huge staff of proud gardeners, deputy head gardener, head gardener, the lot – most of them working just in the kitchen gardens. De Saumarez fought with Nelson, won the Battle of Algeciras for him (nope, me neither) and made a fortune from naval spoils. He returned home and married another fortune in heiress Martha le Merchant whose family owned what’s now Saumarez Park. They were, to cut a long story short, rolling in it.

Anyway, those were the days: now the States of Guernsey own the park and its walled kitchen garden, and the ‘staff’ is down to a few dozen volunteers led by the redoubtable (and great fun) Ivan le Tissier and head gardener Jill Tetlaw. 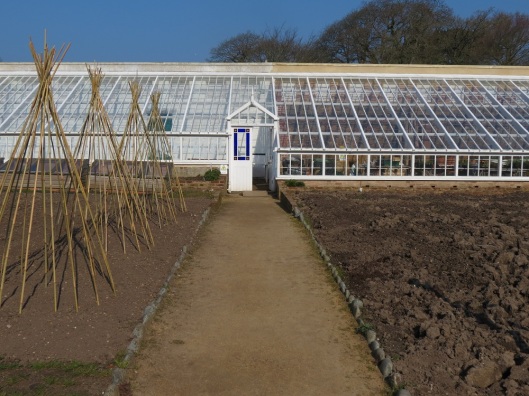 Between them, since 2006, they have restored three magnificent but tumbledown glasshouses spanning 170ft, once used to produce Guernsey’s commercial crop of grapes. They’ve also cleared a mountain of propagation equipment left behind by the council’s parks department, and set out metre after metre of hoggin path edged with cobbles set in cement. And in between all that they had to set up a whole organisation to do it, the Guernsey Botanical Trust; Raymond Evison, of clematis fame, was a founder member and a driving force behind the project.

And they’re still going: they’ve just uncovered an old underground boiler set 15ft below ground level into the greenhouse wall. They’re still trying to figure out why it was put there, and solve mysteries like why it’s so clean it obviously hasn’t ever been used. 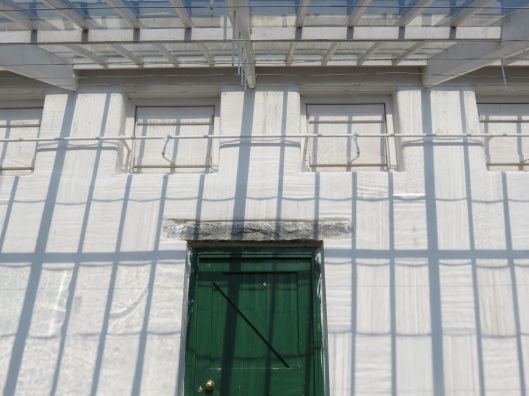 These are ventilation shutters, a feature I’ve never seen before in a Victorian greenhouse like this one: they go through the wall to the outside and you winch them open to let the air out and cool the greenhouse on hot days.

The whole place is spick and span: perfectly trimmed espaliers and soft fruit, and a greenhouse bursting with new seedlings on my visit. Inside the greenhouse is all the equipment needed for raising grapes – including a kind of lie-on ladder which hung just below the glass on runners, parallel with the vines, where a gardener would lie facing upwards to do the pruning and training. Hot work, I’d imagine. They grew ‘Cannon Hall’ here, a Muscat grape grown widely in Guernsey in the days of commercial grape production, that is by all accounts as sweet as a lychee. The volunteers plan to re-plant six vines this year, as well as reinstating the ladder.

Out in the garden they are sticking to Victorian cultivars, as far as possible those grown on Guernsey and all painstakingly researched. Among the pears are Chaumontels, a Guernsey variety described in Mawe and Abercrombie’s ‘Universal Gardener’ as having a ‘melting… very rich, delicious flavour’ which sounds promising.

Other detective hunts haven’t been quite so rewarding: a search for ‘Golden Queen’ raspberries that volunteers finally tracked down to a Swedish seed bank has proved spindly, weak and rather unsatisfactory to grow. You can’t win them all: and sometimes there’s a reason why heritage varieties went out of cultivation. 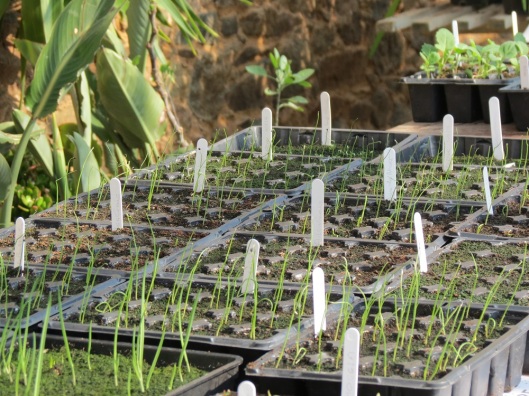 This year’s crops on their way and growing fast

They now have some 300 varieties of vegetable, herb and cutting flower, as well as an oriental veg garden (a nod to the 4th Baron de Saumarez who spent some time in Japan). Some, like the parsnip ‘Guernsey Demi-Longue’ are thought to grow nowhere else – one for the Heritage Seed Library, perhaps. All the produce is sold at the gate and in the cafe at the manor house.

It’s a model example of how this kind of project should be: driven by knowledgeable, skilled people whose enthusiasm, genuine interest – bordering on obsession – and deep devotion to the project seems to know no end. I came away filled with admiration. If ever there was a garden which captures the spirit of the people which created it, this is it.