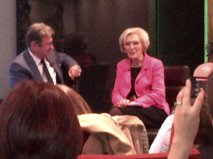 The RHS launched the 2016 Chelsea Flower Show in style yesterday: we had Alan Titchmarsh interviewing Mary Berry and canapés with caviar. I felt positively spoilt.

As always the launch press event is all about the details you want to know but can’t (always) get off the press releases. So here’s the lowdown on what not to miss at Chelsea this year – and I’m not, on the whole, talking gardens:

The Queen’s 90th birthday party: Yes, HRH is a nonagenarian. It didn’t surprise me to learn that she’s now clocked up 51 visits to Chelsea: getting kicked out at 3pm on press day so she can view the gardens without the hoi polloi bothering her is one of the traditions of Chelsea I look forward to every year, mainly because it means an early shout on a Monday. 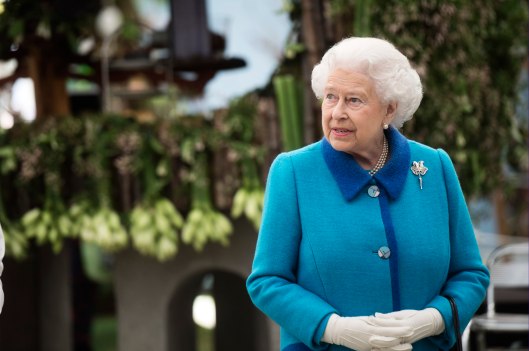 Anyway: the RHS is laying on an exhibition taken from their back catalogue of photos, plus a floral arch inspired by made for Queen Victoria in Reigate, of all places.

Poppies will be much in evidence and no doubt much discussed: an installation of 300,000 crocheted poppies (yes, you did read that right) will cover 2000 square metres either side of the walkway leading up to the recently denuded front facade of the Royal Hospital in a sea of red. It is – as one journo pointed out – reminiscent of the Tower of London poppy installation a couple of years ago: but cosier. 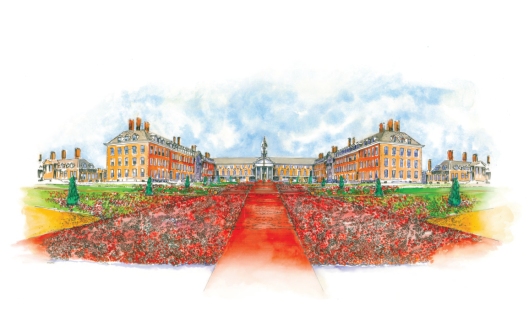 Boy, that’s a lot of poppies…

Poor old Alan got a lot of stick for his part in wiping away centuries of ancient tree and replacing them with a new design by George Carter: but as he said, ‘a Grade I listed building by Christopher Wren deserved better than an overgrown Victorian shrubbery’. Quite. 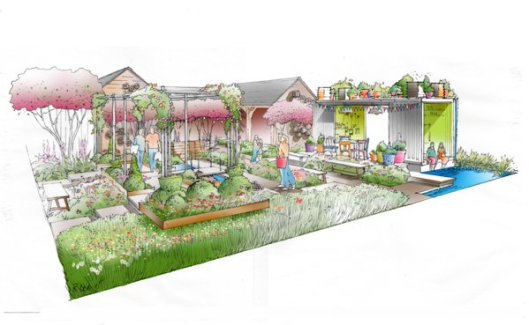 Ann-Marie Powell is designing the RHS garden (better to just say that than its full title, The RHS Greening Grey Britain Garden for Health, Happiness and Horticulture – snappy, eh?). I love Ann-Marie’s gardens: they burst with a kind of irrepressible energy, all enthusiasm and verve. There will be much gorgeousness including a perennial meadow, kitchen garden and demonstration beds. And you can walk through it. Divine.

There’s a new award: the poor folk who work their socks off constructing every painstaking detail of the show gardens yet barely getting a mention in the footnotes by comparison with the glitzy designers (a bit like the drummer in a glam rock band) will – at long last – get their very own award, the Best Construction Award. All gardens which score ‘excellent’ for construction on the judging sheets will go forward automatically for the gong.

There are seven female designers on Main Avenue this year: not, the RHS was at pains to assure us, because of any particular positive discrimination during the selection process but rather because of all the chat last year about the fact that there were only two prompted some of our best female designers to think about putting themselves forward. It’s still not 50:50 (there are 17 show gardens) but it’s a good start.

Sarah Eberle is designing the Hillier Garden in the Pavilion (as well as her beautiful watery Artisan Garden). Seasoned team member Ricky Dorlay – 50 Chelseas and counting – is there though of course the designer of the last several dozen gold medal winning exhibits previous to this, Andy McIndoe, and ever-smiley plantswoman Pip Bensley have moved on to pastures new. We’re promised a more designerly garden with a central water feature and plant groupings which will work not only with each other, but also in your garden. It’ll be right alongside their old plot around the monument, now taken by Bowden Hostas and the Orient Express’s sister train: the urge to compare-and-contrast will be hard to resist.

Nurseries are going conceptual: several are working with designer Kate Gould to bring a ‘more conceptual bent’ to exhibits in the Pavilion. The Mayan inspired temple pyramid at T3 Plants should be good…

You can wear a bobble suit with some kind of sensor system that lights up and tells you when you’re gardening badly. Have a go at digging on the stand and the team from the University of Coventry will tell you why your back always aches afterwards.

There are two new RHS Ambassadors: Young Hort Jamie Butterworth (is it me or are gardeners getting younger, like policemen and teachers?) and the redoubtable Jekka McVicar have both been recruited to the RHS cause. Both already do such a lot for the RHS we’ll be hard put to spot the difference, but it’s great that their huge efforts and achievements are being recognised.