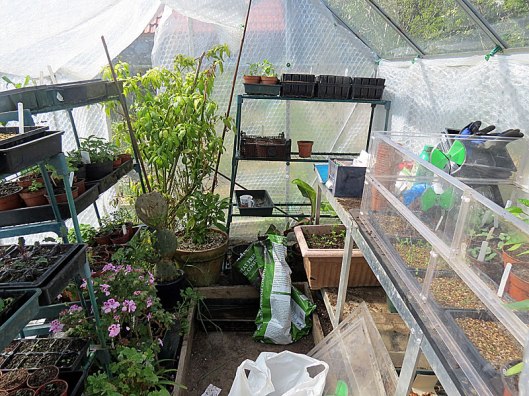 As always in April, there’s a traffic jam in my greenhouse. Outside, the cold frame is jam-packed with evicted seedlings but still they keep coming, as April is second only to March in terms of how much needs sowing yet you’ve still got the tender plants sheltering and taking up space, to say nothing of last month’s seedlings taking their time over growing big enough to go outside in their turn.

Still, so far, so good and there are lots of promising little things going on.

It took me a long time to realise that Uchiki Kuri were the same thing as Potimarron – a French squash I’ve grown before and absolutely loved. They taste of chestnuts – a smoky, savoury flavour quite different from ordinary squash. I’m growing these just to make sure that they really are the same thing and not some Japanese upstart imitator (with apologies to the Japanese, who thought this was their heirloom squash and have no doubt been cross with the French ever since). 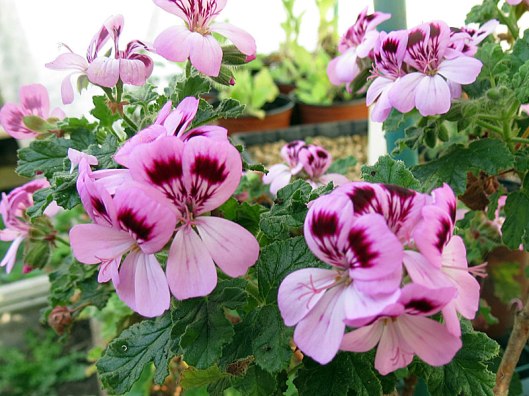 I have had great success overwintering my little collection of scented-leaved pelargoniums this year: this one is P. quercifolium, with pretty leaves the shape of oak leaves. I took quite a lot of cuttings this spring too as I was potting the parents on and trimming them back in their start-the-season haircut: and most of them have taken, so it’s going to be a bit of a scented-leaved pellies summer. These are going outside to harden off just as soon as there’s space in the cold frame… 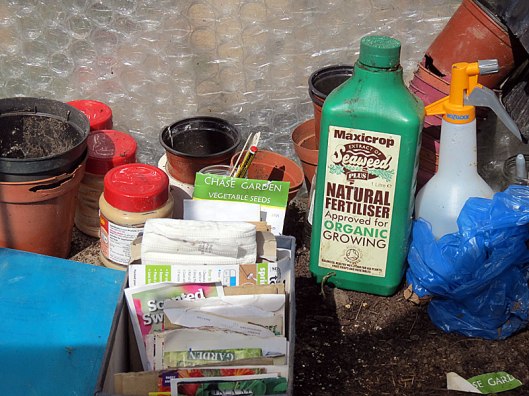 And finally I thought it might give you a laugh to see the tip that passes for my potting bench, in one corner of the greenhouse taking up valuable room when actually it ought to be in the shed (but we didn’t get around to building it this winter).

In case you were wondering, the peanut butter is for trapping mice (I keep the last scrapings from our breakfast spread, which is why it’s three pots – only a little in each one).

Three casualties so far in the gardener-vs-whiskery ones skirmish which followed the clandestine savaging of a mangetout pea sowing one night, but it’s all gone quiet again: I even dared to put in the beans a week or so ago and nothing’s gone missing (yet). So I’m hopeful that they’ve learned their lesson and are staying clear.

I do hate trapping mice – it’s far less humane than our feral cat which is my usual control method. But they make it impossible to grow any legumes (or sweetcorn, come to think of it) if you don’t – so I grit my teeth and get on with it. Artemisia leaves laid on the floor of the greenhouse are supposed to keep them off, as is mint – they don’t like the smell, apparently. I’ll give that a try next time – but I’ll keep the traps handy, just in case.

2 thoughts on “This month in the greenhouse: April”