It’s been a month of making progress, if slow: the mad rush of spring has calmed and I’m just planting out the last of my young plants (looking a bit the worse for wear, I have to say: this drought-ridden spring hasn’t been kind to plants in pots).

But for now I can enjoy the garden burgeoning into colour, everything growing at the rate of knots, and my earlier work coming – sometimes – good.

It won’t surprise anyone who knows me that the veg garden is seeing most of the action: so that’s where I’m concentrating for my end-of-month stocktake this time. 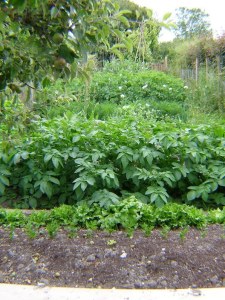 There have been a few surprises as I’m trialling one or two veg varieties this year: first up is an amazing pea, due to make its debut in the Thompson & Morgan catalogue next year I believe. If you’re not yet convinced that veg can be as beautiful as ornamentals, take a look at this:

The all-important taste test, of course, has yet to come: at the moment the pods are rather a muddy purple tinged green, not unattractive but not exactly wow-value either. We’ll see: just love those flowers though.

Another splash of colour is the double row of marigolds I sowed on both sides of my onion bed: 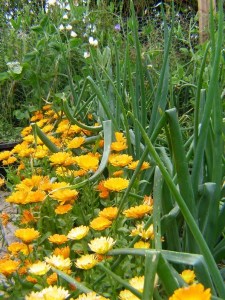 I’m so doing this again: it makes me smile every time I see it. It’s supposed to deter onion fly too: they get confused by the strong scent of the calendula. Well – there aren’t any onion flies as far as I can see: so it seems to be working so far.

The spuds haven’t been so lucky.

I’ve never had early blight on the new potatoes before. It’s making my heart sink for my so-far hale and hearty maincrops. I should know, of course, that in damp and rainy Somerset the chances of escaping fungal disease of any kind are pretty close to zero: but such an early arrival has come as something of a surprise. The spuds themselves don’t seem affected: these are ‘Foremost’, nice enough, but rather bland for my taste.

And finally: a visit to the engine room.

Packed with growbags this year: there are over 20 in there, at last count. It’s not how I usually do it – I’m a big fan of growing in soil in the greenhouse borders as a rule, as plants look after themselves so much better. But this is the greenhouse I inherited (rather than the one I brought back from the allotment: that’s still being planted up with cucumbers, melons and sweet peppers). So it’s on a hard standing, and I didn’t have much choice.

Fortunately I was after some experiments to do for t’other blog, so I’ve got all sorts of things going on in here: product reviews, trying out different supports, you name it. Oh, and those baskets in the back are my sweet potatoes: all of them T65 this year after they won my undying support by producing my best crop last season.

Elsewhere, the whole garden is getting decidedly woolly around the edges, and I am, frankly, dreading July: it’s hedge-cutting month, and strim-the-undergrowth month, so I’m looking down the wrong end of a lot of hours strapped to either strimmer or hedge-trimmer. I have half a mile of hedge here: this is no small undertaking. Here’s what we’re looking at: the back slope gives some idea of the jungle-like undergrowth: 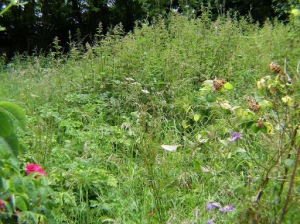 …and here’s a typical hedge. 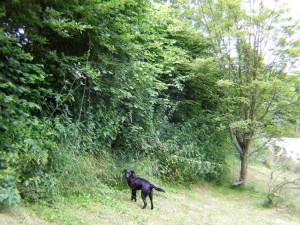 Luckily they’re not all quite that tall, but since they’re all hazel-dominated mixed hedges they’re pretty much this overgrown. Wish me luck.

Thanks as always to Helen at The Patient Gardener for hosting the EOMV!