How sentimental do you get about your plants?

I know I’m utterly hopeless about mine. It is one of the reasons why my garden has never made the metamorphosis into Proper Garden: attempts at designing it have always been waylaid by a hopeless incontinence where plants are concerned, compelling me to reject the beautifully-designed composition of three or four carefully-chosen varieties in favour of the current hodgepodge of one plant here, one plant there and another one I couldn’t resist shoehorned in between. I really should know better.

And I also get terribly attached to individual plants. Take my magnolia, for example. I got it while I was still in my last house in south-west London, as one of those freebie offers you get from magazines: not knowing any better at the time, I thought to myself, “Ah! 50p for a magnolia! that’s good value!” and sent off for it.

The resulting 6″ high twig needed mollycoddling to an absurd degree: I kept it in a pot for the first five years as it was so small I daren’t risk losing it in my rumbustious borders. I finally dared to plant it out when we first moved here, by which time it was a more confidence-inspiring three feet tall or so, popping it into a corner of my front garden just outside my living room window. So that dates it: a tad short of 9 years ago, and the plant itself is about 14 years old.

Not long afterwards, it put out its first tentative flower, and I discovered for the first time that the rather unduly optimistic label it came with, which declared it a Magnolia liliiflora ‘Susan’ with rich burgundy-red flowers, it was in fact a Magnolia stellata with spidery white flowers. This came as some surprise, but rather a pleasant one.

It has been improving its display every year since: plants seem so grateful to you when you rescue them from an uncertain beginning and nurse them back to the point where they can do what they were born to do. Last year my little twig hit the majestic height of about 6ft and in April and May was a riotous fireworks display of flowers that took my breath away every time I looked at it.

But oh, dear: just look at it this year. My poor lovely magnolia. 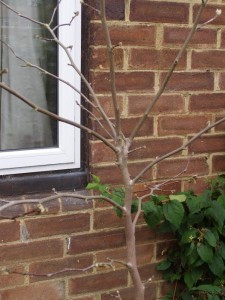 It did manage a handful of spidery flowers, but they were tinged with brown and quickly died off. This was my only – and most heart-breaking – frost casualty this year.

I couldn’t bring myself to write her off so left the apparently dead remains in the border. Then I was rootling around doing the weeding about a month ago and realised all is not lost. 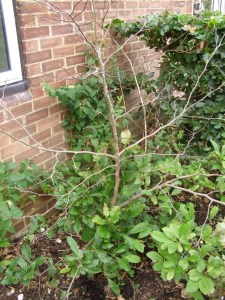 It looks a little peculiar: but there is definitely growth coming from the base. 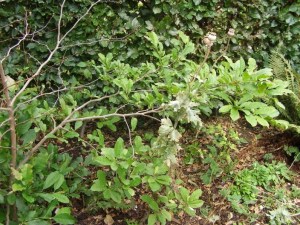 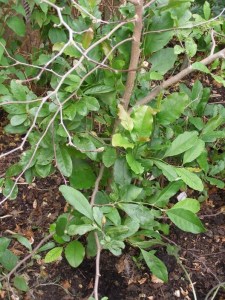 …and a great many smaller shoots firing up from the lower trunk. She’s survived over a decade to get to this point and she ain’t giving up yet.

Now my only dilemma is what to do. The obvious is to prune out the top growth and shorten that long branch so it’s all in proportion again: I suspect she’ll end up rather multistemmed, but that may be an advantage.

But more to the point, bearing in mind my imminent departure, do you think she’ll survive being moved? I had thought I would have to cut her down, so the new owners wouldn’t get the joy of all those flowers anyway: now that she’s recovered, I’m feeling the urge to continue our long and rather lovely relationship.

On the other hand, of course, I’m going to have chalky soil where I’m going. Though M. stellata is one of the magnolias which is said not to mind a little alkaline, this is a lot alkaline. So I may be putting her through the mill again and it may be better to do the altruistic thing and prune her to shape and leave her for our successors to enjoy.

If I could only be less maudlin about my plants I wouldn’t have this problem. But then on the other hand I probably wouldn’t be gardening either. There’s no hope, really, is there?