We went to visit the new house the other day: and this time, I was armed with a camera. Thought you might like a little sneak peak: here’s my new garden.

(I should hasten to add that Long Hair is my eldest, Blue Jacket is my youngest, and Blonde Hair belongs to the current owners, and is rather sweet. The dog, unfortunately, also belongs to them: we plan to install our own very soon).

The garden is in what’s left of a former quarry, which explains the steep slope at the back. You can’t quite make out that there are also very steep banks at either side, presenting some, ahem, interesting gardening challenges.

Anyway: this bit measures about 50ft x 200ft. But that’s not all: this is a garden of many parts. 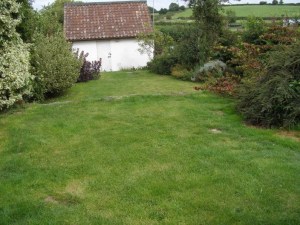 Part II is a smaller and more well-behaved bit to the other side of the house: it’s stepped down the hill in a rather attractive sort of way (this is looking down the slope).

And here’s part III. We rather optimistically call it the orchard, mainly on the grounds that it has two apple trees in it (as well as a not-very-well-looking pear tree): it’s not quite the sweeping vistas you would expect of your average orchard as it’s long and very thin. I measured it at approximately 180ft x 15ft.

There’s a bit more too, further up the hill, which we’re optimistically referring to as the paddock so doesn’t really count as garden: we’re going to be using that mainly for my chickens and other animals, and possibly my husband (don’t worry, I’ll invite him down to the house from time to time). There’s also a sort of raised rockery sort of thing in front of the house which rather defies explanation, photography or indeed description.

Soil is chalky but not too dry (owing to the bowl-like dip) and it’s all on the side of a south-facing hill, with the long side facing south, if you know what I mean. Any ideas, inspirations or just thoughts on what to do will be just wonderful and pathetically gratefully received.

I will introduce you properly when we’re in: we’re not entirely free of the potential for jinx just yet as we’re still a day or two off exchanging contracts. But there is just one week and four days to go until moving day now: and this is beginning to feel very imminent indeed.

9 thoughts on “A little sneak peek”