I took a rip saw to my new triffid the other day. I couldn’t quite take the JAS option and sharpen my axe (apart from anything else everyone kept running away when I asked them to help). So, a breadknife being laughably small, I raided my husband’s carpentry workshop (don’t worry, dear, I chose the rusty one).

My heart was in my mouth, I could barely look…. but actually, it was remarkably easy, and now my one monster triffid is three baby triffids. 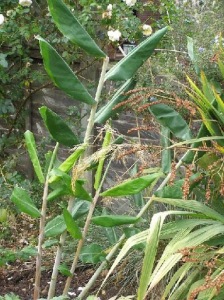 Most at risk of being lost to frost damage, especially if we have another winter like the last one, Triffid 1 is outside, in the border, and will stay outside all winter. I’ll be giving it a thick mulch of autumn leaves, topped off with a pinned-down plastic bag (to keep the water off the crown as much as possible) covered in compost for extra insulation. 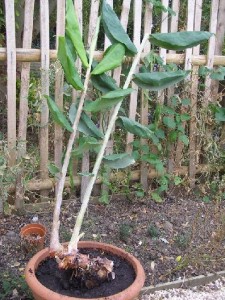 (can you tell this is the knobbly bit that was trying to get out of the original pot?)

Potted up into a nice 50:50 mix of John Innes and multi-purpose, plus a handful of sand thrown in for drainage, this chap is going into the frost-free greenhouse to see out the winter. I’m not too confident, to be honest, as I did this to my majestically lush Ensete ventricosum ‘Maurelii’ last year, and that’s supposed to put up with roughly the same conditions as a Hedychium – but it turned to mush pretty quickly.

And at DEFCON 5 is my fall-back position, the one I really ought to be able to get to survive, the one I’m risking domestic peace and tranquillity to preserve by putting it in the dining room for the winter:

Actually there’s a sting in the tail, as this was the only chunk which came away without a big hunk of root on it. It had some very sturdy-looking side roots which I hope are even as I write developing into the large rope-like snakes of its larger brothers. But in the meantime I’ve had to support it with a network of canes to keep it upright and the roots, such as they are, as stable as possible.

I chopped them all back by about two-thirds so the root systems wouldn’t have the bother of supporting nine-foot greenery as well as finding their way around their containers (or my other plants, in the case of Triffid 1). Now I just have to watch every single weather forecast for that crucial first frost: in fact I think even if one hasn’t arrived by next week or so I’m bringing them in anyway. Wish me luck.

4 thoughts on “I’ve got three triffids”