Never one to sit around for long when there’s a garden makeover to be done, I was back at it this week following last week’s (if I do say it myself) pretty good start to doing up my front garden.

It’s getting towards the end of bare-root season, and since the design relies on about 21m of box hedging I thought I’d better get my skates on if I wanted to pay anything like a reasonable price.

So three big hefty bundles of box saplings arrived on my doorstep during the week, all around 10-15cm high which is a good size for getting a hedge started with. In fact as you can see from the picture, once it’s bulked out a bit it won’t take much clipping to make that small formal hedge a reality.

I put them in at around 15cm apart (that’s 6″ in my head – yes I do still have to convert – though handily both measurements come out at about a trowel’s length). That was a bit closer than perhaps I should have done – estimates for the best spacing ranged from 7 per metre (that’s the 6″ spacing) to around 4 per metre (that’s more like 10″). I thought 4 per metre sounded very sparse, so went for the tighter spacing – I can always thin them out a bit later if it looks like there are going to be problems.

I had a whole lot of soil improvement to do first – as you might expect, the soil on the ex-gravel drive bit was about as poor as it gets. Not only compacted, but grey with lack of nutrients. So anyway – I dug a good spit’s depth of trench and half-filled it with soil improver before the little box plants got anywhere near it. They should be fine in that – and I’ll mulch them next month too, just to keep the good work going. Here’s what it all looked like once I’d finished: 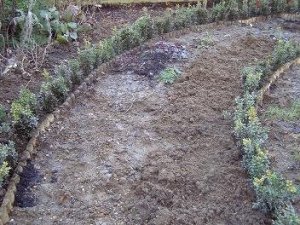 Now it’s just a matter of filling that big gap with lots of lovely plants. Could that mean…. shopping again? Woo hoo, I love the spring!