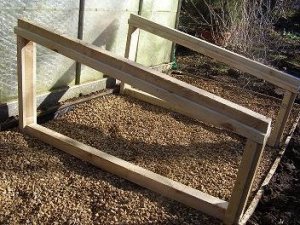 Hmm… photography never was my strong point, but bear with me here.

For my mega-coldframe I’ve adapted the design from Terence Conran’s Garden DIY, a very handy little book which has lots of useful projects and explains things simply enough even for novices like me. I’ve made both my compost bins from a design in this book, and very successful they’ve been too (when I make the third, I’ll put that on here too). So if anything in my description of how to make these doesn’t make sense – get the book.

After getting the base right, it’s time for some woodwork. This design centres around dividing frames, which are then held together using the cladding. I suspect it will have little structural strength in the long run – i.e. I won’t be able to move it much – but that doesn’t bother me: if it bothers you, you’ll need to work in some stronger connecting pieces to hold the dividers together.

The dividers are made from 2×2 (5cmx5cm for the metrically-minded) treated timber. Measure the depth (front to back) and width (side to side) of the space you have available – the good thing about this particular design is that you can have as many or as few dividers as you like, so the coldframe can be whatever size you wish. Mine is made up of three sections, so I’ve made four dividers (two at each end, two in the middle), which will eventually be spaced a little over 2ft apart.

Nail the two uprights on to the base at each end, using 2 3″ nails at each joint, driven in at an angle – this will mean the joint is much firmer and won’t pull apart.

Nail the top rail across them, using the same angled-nail technique as before, and leaving a length of rail sticking out from each end. Finally, saw off the ends of the top rail so that they lie flush with the uprights.

Next: putting on support battens (you can see a couple in the picture above – sneak preview!)