The thing I love most about gardening is that no matter how long you’ve been doing it, even if you’ve made it your life for the last 20 years as I have, you are never an ‘expert’; there is always someone, somewhere who knows much, much more than you. That means the learning never stops: there’s still new stuff to find out about, new techniques to try, and best of all new plants to get to know. It is never, ever boring.

So one of the big highlights for me this summer has been making the acquaintance of a plant I’ve never met before. I came across it en masse in the garden at Highdown in Sussex – incidentally, a wonderful example of how a garden run by the local council (in this case, Worthing Borough Council) should be. The whole thing is a National Collection, nestled in the side of a chalk quarry, with delights around every corner. And it’s free. Talk about breaking the mould.

Anyway, down in the bottom of the valley was a sea of little trees, each smothered in delicate white blossoms set off to perfection by cerise-pink sepals. The scent was intoxicating: it filled the air with a sweet, almost lilac-like perfume, heady and exhilarating. I had no idea what it was, so went off to find an obliging gardener (of which there are many at Highdown). And she informed me it was a Clerodendron.

In this case, I’ve later discovered, C. trichotomum, a summer-flowering and slightly tender shrub-or-small-tree. It can’t be that tender if it grows in such profusion on the South Downs, which I know, having spent a childhood there, is prone to a vicious frost from time to time – though admittedly these were in a very sheltered valley. 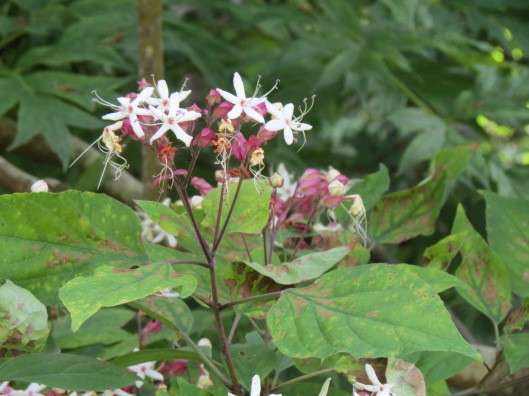 Those white flowers are followed by fat, glossy turquoise berries that persist through autumn, again contrasted against those brilliantly colourful sepals.

As it happens, in one of those odd coïncidences, I realised on coming home that I had already come across this tree – I just didn’t realise it. Last year I was hacking back an overgrown bit of shrubbery in the chicken garden (more properly known as The Beeches B&B) which I look after not far from here, and pruned back a lilac off a neat little tree I couldn’t identify. It hadn’t flowered, but then not much would if smothered by a large lilac branch.

But when I went back to the garden only a week or so after returning from Highdown, the little tree had burst into flower in celebration of its release: and yes, dear reader, you have probably already guessed, I recognised it straight away as C. trichotomum. 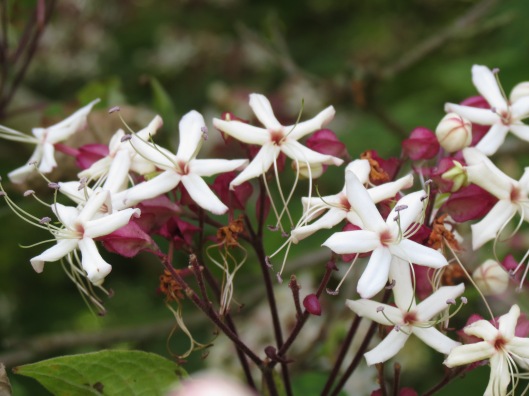 It is really a very elegant little tree: the ones I saw in Highdown and at the garden at The Beeches are no more than about 10ft or so tall. It has a nice neat umbrella shape about it, and the leaves are held in pleasing little rosettes. Altogether a thing of beauty. Its only slight drawback is that it does sucker rather a lot – which explains the size of the thicket at Highdown – so when it’s happy you do have to keep on top of it. But that’s a small price to pay for a thing so lovely.