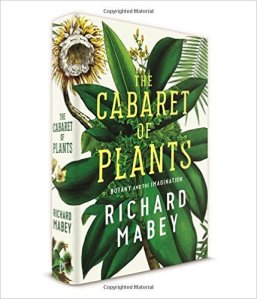 It is a rare garden writer whose words make you look entirely differently at the plants you have known all your life.

But Richard Mabey has so far made me review my attitudes towards everything from bindweed and horsetail (in his very entertaining ‘Weeds‘ – you will never look at a patch of couch grass in quite the same way again) to fairy ring mushrooms (‘Food for Free’ – I retain a little of my natural scepticism on this one, as I’ve always thought foraging rather overrated and Richard hasn’t quite converted me, but he did provide me with a stonking good read).

So I was really pleased when my in-laws presented me with one of his books I hadn’t come across yet, ‘The Cabaret of Plants‘: and once again I was thrown headlong into a world where plants make you gasp anew in awe and astonishment.

The ‘cabaret’ is explained as the parts plants play in the ‘theatre’ of the world; but the play is one ‘full of mimicry and unexpected punchlines’ where anything goes and nobody is handing out stage directions.

It’s a good analogy: this book is setting out to rekindle our ability to marvel at plants, just for themselves: our ‘ancient sense of wonder’ at this most diverse and astonishing group of organisms.

The result is eclectic, to say the least. It’s a joy to read: Richard is a polymath who wears his learning lightly, but can’t quite help taking little darting excursions into the poetry of Wordsworth, Iberian bar snacks, the cult of the Green Man, South American shamans and their slightly dodgy drug habits, electron microscopy, the Great Western Railway and Amazon exploration in the 19th century, among other things. Many, many other things. It’s quite dizzying, and a little exhilarating.

And the plants…. Once more I found myself looking at my favourite organisms in the world through quite different eyes, opened for me by Richard’s swooping flight through rivers, oceans, forests and deserts, across the ages and scooping up characters and stories as he goes.

I loved the story of the moonflower, a cactus from Brazil which climbs trees with headily-scented flowers which open on just one night a year, when the moon is full. And the intriguing evidence that Mimosa pudica, the sensitive plant, is capable of learning. Then there’s the orchid which lives its entire life underground, and the poor lonely cycad, Encephalartos woodii, which found itself in an evolutionary cul-de-sac when the last individuals turned out to be male-only. One grows today at Kew, in the Temperate House if you want to visit. Nobody has ever seen a female, so the males in cultivation (and there are none left in the wild) are doomed to an eternal batchelor existence.

I could go on, but that’s to spoil this magpie’s nest of a book, full of jewels and shiny things to make you catch your breath in admiration. And all beautifully written, too, with a poet’s feel for language. I loved it. And best of all, I came away with one overriding thought: aren’t plants amazing?