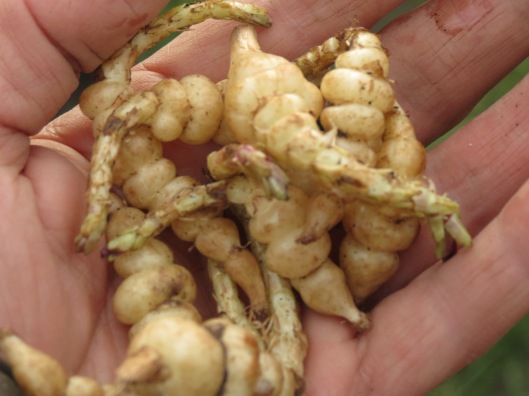 Not much gardening going on yesterday: it was blowing a hooley again and though it wasn’t exactly raining hard, what there was flew at you horizontally on the wind like needles. I am an unashamedly fair weather gardener: I don’t see the point of turning your garden into a muddy slurry pit under your feet and mashing your soil into a sodden pulp just so you can say you’ve been gardening in the rain. Good job I don’t work in a Proper Garden where they can make me go outside even if I don’t want to. Anyway: on days like yesterday, I beat a dignified retreat and spend the day at my desk.

Today though was a different story: lovely sunshine, a balmy breeze and everything was drying out nicely. Time to do a bit more sowing: the first peas and broad beans are already in the cold frame hardening off, and the next batch of mangetouts are now cooking nicely in my 15°C propagator.

I’m not quite venturing outside yet: the soil is still chilly to the touch and we’re regularly slumping to zero at night so direct sowing is still a few weeks off yet. That’s not to say you can’t plant, though.

The above curious little witchetty grub lookalikes are a new venture for me this year. These are Chinese artichokes, crosnes, or Stachys affinis: take your pick. Whatever you call them, they’re hardy so you can plant them direct outside whenever you want – unlike my other exotic veg (mashua, oca, yacon) which are still confined to the frost-free greenhouse. So I’m going to give them a go.

I’ve planted them in a patch by the pond in the exotic edibles garden. It’s a little triangle that’s quite nicely confined, having a stone wall on two sides and the pond across the third. The reason for the fencing is that these are veg with ambitions: they will multiply and spread, even if you eat lots of them, and while it’s never a bad thing to have a lot of anything edible it can be a pain if they’re anywhere near other plants (see Jerusalem artichokes and mint, to which Chinese artichokes are related).

They were easy enough to plant: bury on their sides about 5cm deep, and around 15cm apart (not that it matters too much as they’ll soon form a dense mat). They look like deadnettle once they’re up, so I may have to liven them up with a few flowers or this is going to be a dull little corner indeed.

You harvest them from about October. Cleaning is a bit of a faff: it’s easier if you grow them in lighter soils, but in heavy soils you’ll need a bit of elbow grease and a nailbrush. There’s no need to peel. They have a crunch like water chestnuts and a delicate artichoke flavour. Sounds great. I shall report back.