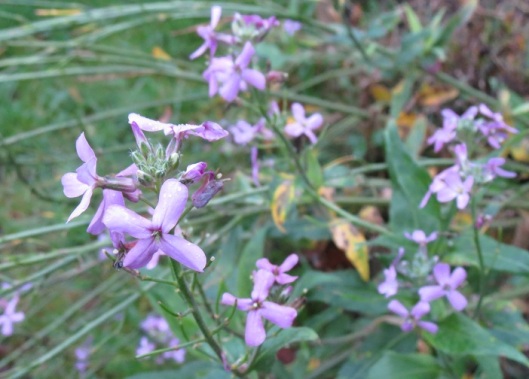 We don’t quite have daffodils up and blooming here, like they do in all points from Cornwall to Cheshire apparently: but we do have a lot of confused flowers.

Never mind spring flowers, either: we have summer flowers in bloom here. Asparagus peas in brick red, marigolds and celandines, pretty little pinks and neon-coloured salvias still going strong. The sweet rocket has been in bloom since April; we have hellebores and strawberry flowers and even the tree chilli is gamely putting out a few purple blossoms.

I don’t blame them: I’m confused myself. The temperatures we’ve got right now, in the mid-teens, are more akin to what you’d get in June.

Mind you, the torrential rain and stormy weather is of more normal December quantities, so you still get the horizontal rain blowing your hat into the next county and ankle-deep mud to slosh through on your way to get up the veg garden to pick the kale for tea. Only difference is, you’re doing it in a t-shirt (bare arms dry so much quicker than jumpers, don’t you think?)

Apparently it’s something to do with the Azores, a straggle of half-forgotten islands about four hours’ travel off the west coast of Portugal. Maybe they’re getting their own back for nobody knowing or much caring where they are on the map. I can’t help noticing their weather is more-or-less exactly the same as ours right now. Rather worryingly it goes up to 18°C next week. Hope that’s not coming our way.

It’s not going to stop till at least the middle of next month. After that, who knows: maybe we’ll get the deep freeze the Express was screaming about last month (rather laughably, as it turns out).

I do hope so, or we won’t have any apples, blackcurrants or garlic next year. All three depend on a prolonged spell of chilling: 7°C day and night for three weeks is the figure generally bandied about.

Rhubarb and strawberries need chilling for good crops, too: and goodness knows what’s going to happen to my strawbs this year. They were flowering in November, then we had one atypical night of hard frost and all the centres turned black. I thought that was it, but no: they’re off again.

At the moment my inclination is to pick off the flowers to persuade the plants to keep their energies for themselves for the time being: let’s just hope they’re not exhausted by spring.

The daffs are unlikely to be back, though: they have a once-only performance, so once you’ve had it, you’ve had it. This, though, is the new normal: for we have forgotten what the old normal even means any more. So we’d better get used to it, I’m afraid.

*Apologies to those of you who prefer their sentences grammatically correct: my ability to write in adult is dwindling the longer I live with two teenagers. Roughly translated, for those of you over the age of, oh, 15, this means ‘Goodness, isn’t the weather remarkable for the time of year!’ Which makes you sound like Hyacinth Bucket instead.