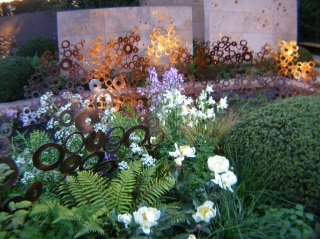 A rare treat this year: waiting for a taxi after finishing particularly late, I went for a wander up Main Avenue and got to see the magical world that is Chelsea after dark.

Andy Sturgeon’s garden in particular came to life after the sun went down. I’ll confess that until this point I haven’t really been that taken with it. It was all right – the planting was lovely and it was beautifully judged – but I felt the copper sculpture was swamped by the monolithic and mildly brutalist walls marching down the back. For me they were too distracting and diminished the rest of the garden.

By night, though, those walls fade into the background and the copper bubble sculpture shines and dances like a thing alive. The holes in the walls are black by daylight: but by night they light up like glowing circles of gold, echoes of the gleaming sculpture winding through the plants.

There were other gardens, too, which were transformed by light: Tony Smith’s “Green with…” was positively funky in red and silver while Diarmuid Gavin’s tower became more like the Hanging Gardens of Babylon and less like a theme park as the scaffolding retreated under gentle lighting.

There should be special tickets for people to come in and see Chelsea’s gardens lit up like this. In fact I think Andy’s should have stayed under wraps until post-9pm just so people could see it at its best. It completely changed my mind about it: which begs the question, why show it to the public at a time when it’s patently not the most beautiful it can be?

But then that would mean all those bankers and society sorts couldn’t have their swanky parties (for this is what Chelsea becomes after the gates close at 8pm: one huge party in which there are no longer ropes around the gardens and everyone gets to actually use those beautiful buildings for which Chelsea is so famous). I think one evening, though, could be set aside to let the public in: this is one sight which really shouldn’t be missed.

4 thoughts on “Postcard from Chelsea: Saturday”