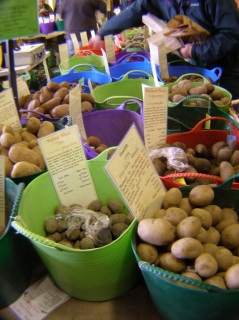 A humble potato day in a little village hall in the middle of nowhere (pace the residents of Castle Cary) in Somerset might seem an unlikely setting for the beginnings of a revolution.

But as I walked around picking out this year’s little bundles of treasure, it occurred to me that everybody in that room was uncomplicatedly and happily going about the task of undermining the establishment – those people who tell you what you can and can’t grow, what varieties of potato you’re ‘allowed’ to buy.

They were doing so with a smile on their faces: peacefully, yet astonishingly effectively. You could see it from the sparkles in their eyes, the excitement as they dithered over ‘Mr Little’s Yetholm Gypsy’ or ‘Vitelotte’ and riffled through the paper seed packets or scooped up a generous mugful of shallot sets. It was the excitement of the person who knows they’re in on something – and that it’s really, really good.

Of course, it’s partly just the joy of gardening: there are few occupations which bring on outbreaks of unadulterated cheeriness in quite the same way.
But I think there’s something else going on here. You see, I’ve seen those expressions before, at seed swaps, on the face of the lady I spoke to about Transition Town Totnes, in the eyes of the rapt audience watching a beekeeper go about his work at an allotment open day in Brighton.

It’s a quiet revolution: one where people just get on with it. They don’t march on Westminster: they don’t even particularly want to take on the world. I’m not sure they even realise they’re revolting.

But what they’re doing is, undeniably, sticking two fingers up at the status quo, at the vested interests, at the government diktats: rejecting all that, and going their own way.
So far it’s also a minority, though a growing one. It’s noticeably middle-class in its concerns and interests, but I don’t see why that makes it any less valid. I find its various manifestations incredibly inspiring, well beyond the initial rather woolly and slightly irrelevant impression they might give at first.
In fact, they couldn’t be more relevant. They give me hope for the future.
Here’s how you, too, can join the revolution:
Potato Days (Jan-March): now happening at a village hall near you. A wonderful opportunity to join other like-minded people in rifling through tubers with unlikely names, eat a great deal of cake and – if you go to one of the larger ones – find out a fair bit about local heritage and gardening. I have no idea how it works to cement a community: but it does.

Seedy Sundays (mostly February): more openly alternative: you’re as likely to come across a local renewable energy cooperative or someone trying to persuade you that building houses out of tyres is the next big thing (actually, it is kind of cool). And the overall concept is definitely more ‘hippy’ – you bring a few seeds you’ve saved from home, you take home as many as you want in return, nobody’s counting, nobody’s watching, they just trust you to join in the spirit of the thing. But because it’s based on trust, it works: and it restores your faith in human nature, which is surely what community is all about.

National Beanpole Week (April): if forests (or at least, woodlands) are your thing, you can get down with the woodsmen at coppicing events around the country. Those who manage the coppiced woodlands in our countryside are often a hidden community: this is the week they come out of the woods and join in with everyone else. Events are community affairs, with demonstrations of traditional crafts, and an encouragement for gardeners to use more locally-sourced, sustainable coppicing products in what they do.
National Allotment Week (August): find out what your local allotments are doing and get to know what a strong community you can forge by just exchanging tips over the plot fence. Many are much more than just a load of people growing veg: Moulsecoomb, in Brighton, have started a forest garden which provides gardening therapy to some of the most disadvantaged kids in the area. They keep bees, too.
and if you’re serious about your revolutionary tendencies:
Community Supported Agriculture: farms run cooperatively by local communities. Now embraced by the National Trust, until recently firmly establishment but becoming more and more revolutionary by the day. They’re running four CSA farms, notably the MyFarm setup at their Wimpole Estate in Cambridgeshire – so democratic that members vote on what to grow and how to raise the animals.
TheTransition Town movement is sweeping the country, having migrated here, like the CSA movement, from across the Atlantic. The most established is Totnes, not a million miles from here (where they grow lettuces for amenity planting) and it’s spreading to dozens of towns from Brighton to Melrose in the Scottish Borders.
It covers so much more than gardening, although growing things is the fuel behind the whole scheme: the thinking is that the entire town becomes self-sufficient, disengaging itself from globalisation and the wider nation and producing its own food, its own energy, its own support systems. It therefore – the thinking is – becomes more resilient, less at the mercy of a whim-led government.
If you follow that to its logical conclusion, soon we won’t need governments at all. Now there’s a revolutionary thought: it might just be that the seeds of change are to be found in our gardens.