And now for probably the most peculiar January Garden Bloggers’ Bloom Day post I shall ever write (I hope).

As all British gardeners are acutely aware, this has not been our usual chilly frost-bitten winter in Blighty. Normally we’re just about poking around for the first nubs of snowdrops and crocuses edging warily through the earth to see if it’s spring yet (it isn’t).

We have our greenhouse heaters going at full blast, we have several layers on just to crunch up the drive (trying not to slip embarrassingly onto our backside in the process) the sun hasn’t been seen since late October and we’re generally a bit on the grumpy side.

We don’t – generally speaking, and last year (and the north) excepted – even have any snow to make us feel all this misery has been worth it: it’s usually alternating between cold and sodden, cold and frozen, cold and windy and drizzle (cold).

Not so the winter of 2011/12. We’ve been struggling to fall below double-digit temperatures at night: by day it’s positively balmy. My garden is full of snowdrops: the crocuses are edging into flower. The roses and nasturtiums haven’t stopped since September: even my Nicotiana mutabilis were still going strong until the first hard frost of the year struck just two days ago, on 13 January. Yes, you read right: the first frost of the year. I have never, ever had it frost-free for so long.

I am rewarded by more blooms in my garden than I have ever had before in January: the winter flowerers are overlapping with the spring flowerers and some of the summer flowerers which have refused to go to bed. Part of me loves it and is revelling in the spectacle, to say nothing of the warmth and the spring-like sunshine. And part of me is filled with dread at the havoc this will play when the true spring begins. Will we even have one, I wonder? 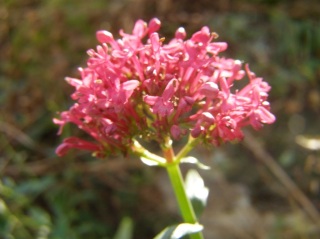 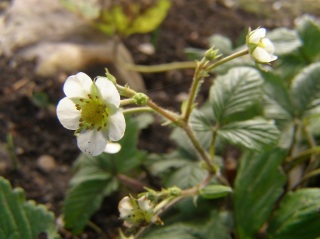 Rose: one of several we refer to as our ‘grandma roses’ 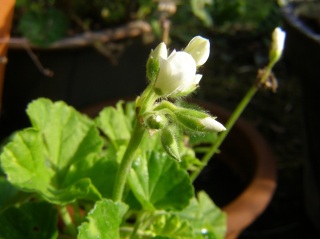 Pelargoniums still flowering in the terracotta pots on the patio 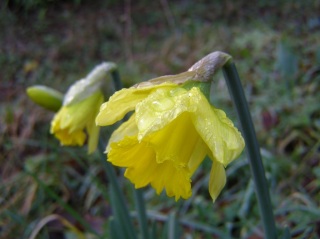 A host of golden daffodils on the hill

Even the lawn has daisies already… 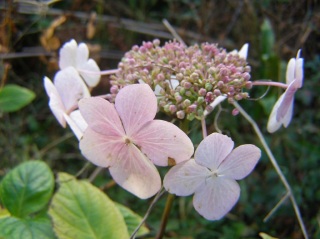 And this hydrangea has forgotten to stop flowering 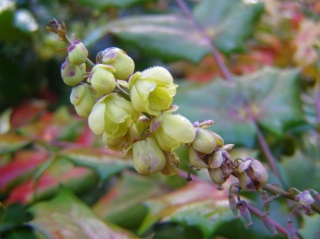 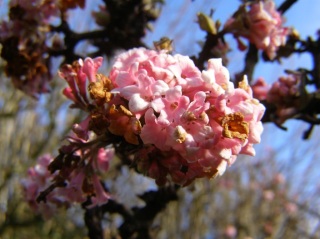 Viburnum x bodnantense ‘Dawn’
PS by way of a reminder of how very odd all this is: I stumbled across this picture today, taken of our garden almost exactly a year ago. 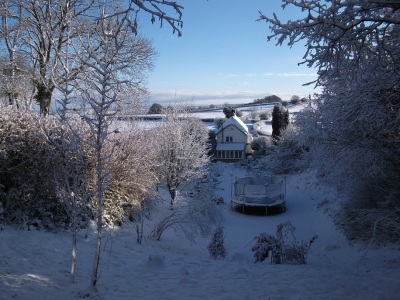 Thanks go as always to Carol at May Dreams Gardens for hosting Garden Bloggers Bloom Day!﻿