Well, all right, strictly speaking it’s the beginning of month view – but I find it hard to resist Helen’s meme over at the Patient Gardener, and last month it was hijacked by various things so I’m overdue for taking ten minutes out to step back and just look.

I’ve been doing a lot of work in what we call our shady seating area – the wide circular bed edged with stone which I’m told was once a pond (and still tries to be one from time to time). This area was overrun with self-sown cranesbill and astrantia; much as I love both, I’m not a big fan of monocultures so most of it had to go.

This created lost of exciting planting opportunities so I had lots of fun colonising them with little cosmos and rudbeckia seedlings: unfortunately the puppies (for yes, there are two now: I’m hoping they may stop multiplying soon) colonised it too.

They’re at the stage where they spend most of their time cannoning around the garden like a pair of snooker balls and eating daylilies (entire plants, right down to the roots). I’m playing with different ways of keeping them off: this criss-cross fence of sturdy hazel stakes hammered firmly into the ground is looking promising. I’ll tie the cross bits together securely and grow things over and through it: eventually with a bit of luck only the dogs will know it’s there.

The rodgersia is in full flow at the moment, complete with impossibly huge bronze leaves and cream explosions of flower erupting all over the place. One day I’ll have to take a deep breath and get in there to divide this clump, as it’s entirely dead in the middle, but for now – my, it’s gorgeous.

Not far from this spot is the current venue for the ongoing bumblebee party: last month it was the cotoneaster, before that it was the Lonicera pileata outside the back door, but now it’s a massive Deutzia (my guess is x hybrida ‘Mont Rose’) in full flower. You can hear the buzzing for miles.

Behind it is the most rockery-like bit of the rockery, and I’m having to reluctantly admit I’m getting quite fond of it. I have no idea what the blue thing is by the way: it’s very disconcerting when you’ve never taken the slightest notice of those little rockery-type things to suddenly have to figure out what they are.

Further along the more open bit of the rockery is steadily turning into a herb garden as I plant up the gaps with my seedlings. The valerian has rather taken over at this end (along with the snow-in-summer which has also colonised the hedgerow). It’s looking so lovely I can’t quite bring myself to haul it out, but I’m going to have to soon as it’s taken possession of all my best herb-growing bits.

The nasturtiums I sowed in March are coming on nicely: this one is ‘Cobra’. 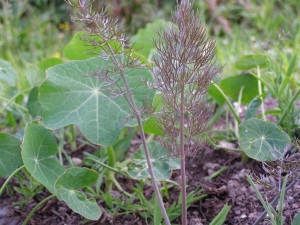 And I’m rather hopeful for this fennel-and-nasturtium combo: seedlings at the moment and struggling to get going what with the lack of rain, but they’ll get there. 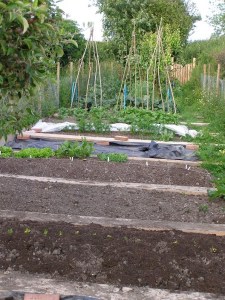 Now for the business end. As usual I’ve been spending most of my time in the veg garden: I’m now almost at the end of my 160-ft stretch and have about 16 4ft x 10ft beds to show for it. It’s rough and ready – the dividers are old scaffold boards – but it’s been a really good quick way to get the veg garden under way.

The main failure this month has been my salad bed experiment: it’s an adaptation of the square-foot gardening technique I discovered while at the Magdalen Project this spring. You divide up the bed into rectangles and sow a different salad ingredient in each rectangle: trouble is if it doesn’t rain for three weeks solid and you swan off to Chelsea in the middle, you’re sunk.

If I may just show off for a minute: just look at my peas. These are ‘Telephone’, a heritage variety, and they grow 6ft tall (the fence at the side is 4ft high, to give you an idea). I’ve never grown peas quite this lusty before: no idea what they taste like (they’ve only just come into flower) but they’re fantastic for swank value.

(the brown bits are dead leaves on the hazel twiggy peasticks by the way: next year must remember to cut them in winter).

I’m rather fond of the way my marigold-and-onion combo has worked out too: it makes a lovely little splash of colour. 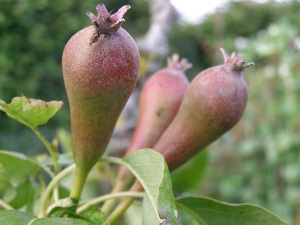 And just as a post-script: did anyone else not know that pears grow upside down to begin with? Or rather, right way up, and then droop as they get heavier?

This is my Conference pear tree, the first I’ve ever ‘owned’, and I’m terribly proud of it: when we got here last September its total harvest for the year had consisted of one pear (and that had been eaten by something small and wriggly – and I don’t mean one of the kids). One hard winter and a good prune later, and it’s laden. I’m chuffed to bits.

5 thoughts on “End of month view: May”