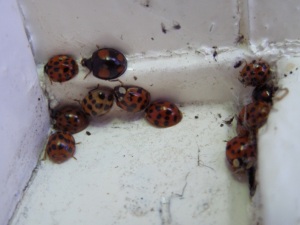 Has anyone else had ladybirds setting up home in odd corners this autumn?

We’ve had a veritable plague. They started appearing early last month, when I took this photo: they were crawling around on the windows, wandering over ceilings, popping up in cupboards. I was initially delighted as I thought, aaahh, dear little ladybirds, looking for somewhere to stay for the winter.

Actually I had no idea they hibernated: but yes, apparently they like all sorts of different hibernating spots. And spots is the word: the number of spots on a ladybird’s back determines where, and if, it will hibernate.

Seven-spots (the most common type) migrate; others mostly hibernate in hollow plant stems: but tree trunks, bushes and fence posts are other favoured spots. It’s mainly two-spots which seek out our houses. And they all hibernate in big groups – it makes finding a mate easier in spring. If all goes well they can live two to three years, apparently. That’s as long as our last pet hamster.

Sadly, though, there isn’t a two-spot to be seen in my little cluster of snoozy ladybirds. That’s because these are not our native ladybirds but the harlequins, the grey squirrels of the ladybird world. They’re from America, but they’re not nice cultured friendly amusing Americans: they’re very large, very successful and very competitive Americans. In fact they have a simple strategy in elbowing out our native ladybirds, which tend not to like to make too much of a fuss (am I overdoing the anthropomorphism here?): they simply eat them out of house, home and aphid colonies.

This leaves me with a dilemma. Obviously the reason we gardeners like ladybirds is because they eat aphids – and a ladybird with a monster appetite sounds like a serious asset to a harassed vegetable gardener. But at what cost?

I am recording my little colony on the UK-wide Harlequin Ladybird Survey (http://www.harlequin-survey.org/) which is tracking the spread of this possibly-not-entirely-unwelcome alien across the country. We are definitely on the fringes of its spread – but it’s definitely here and in some numbers.

But what do I do now? Kick this lot out of the corner of my dining room? Or live and let live? (this last does not apply to our local aphid colony next year, of course….)