I must confess I find portraits a bit boring. Those po-faced people you see lining the oak-panelled walls of stately homes were probably delightful people who would have made deliciously witty dinner guests, but as portraits they’ve never done much for me.

Well – now I know better. Now I know to look over their shoulders.

Roy Strong’s ‘The Artist and the Garden’ is proving a revelation, and I suspect I may never see old paintings in quite the same way again.

This is probably the most famous painting where the background has caused more of a stir than the foreground:

You may well recognise the big fat king in the middle, but don’t look at him – take a peek through those arches on either side. This painting hangs in Hampton Court (holiday home, of course, to Henry VIII) and the glimpse of a garden in the background is just about all that is known of Tudor gardens of the time. A Tudor garden has in fact been entirely recreated, at Hampton Court, complete with snazzy green-and-white raised beds and heraldic beasts on poles, on evidence taken pretty much solely from this painting.

This is Thomas More and family, painted in 1593-4 and currently in the V&A. Yes we all know he was executed for daring to stand up to Henry VIII but never mind that – just look at that garden. That’s a hortus conclusus – an enclosed, mediaeval garden and rare evidence that even then they were doing garden rooms, fenced off with clipped hedges of whitebeam or privet.

And how about this, from 1641? Never mind Arthur 1st Baron Capel and his family – that’s a heck of a garden back there. It is in fact Hadham Hall in Hertfordshire in all its glory, as it was laid out in the late 1630s. The people in the portrait mostly came to a sticky end (particularly Arthur who was executed shortly after Charles I for his loyalty to the king – spectacular example of backing the wrong horse) and so did the Elizabethan house – it was partially destroyed by fire and is now a secondary school. But at the time it boasted the most extravagant garden of its age, and this is one of the best – and only – depictions of its former grandeur. You can see it at the National Portrait Gallery.

This young lady, to be found at the National Maritime Museum, is my favourite though. She’s Elizabeth, Queen of Bohemia, painted in 1603, but never mind that. See that structure behind her right shoulder? That’s worth a closer look. 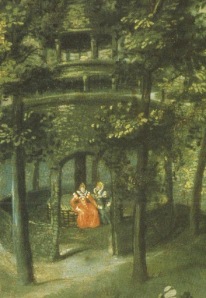 It’s an arbour, and it’s made entirely of pleached trees. Apparently you plant a ring of trees, then pleach the tops into a ‘roof’. You can incorporate extra carpentry – as here – and then plant another tree in the centre and pleach it like an umbrella to make a secondary tier. According to Sir Roy, this is the only representation we have of tree pleaching on this scale in England, although it was quite common in Italy (the Medicis, of course) and the Netherlands.

If there’s one garden design feature which deserves to be resurrected, this has to be it. Anyone short of ideas for next year’s Chelsea?