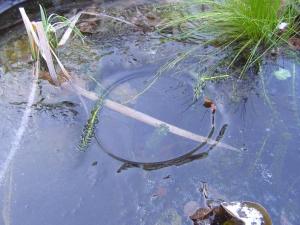 Every morning I set off down the frozen garden with a saucepan of steaming, bubbling water in my hand, to do a little pond maintenance.

Not having had pond fish before – we created this little fishpond late last summer – this is something of a new experience for me. Breaking the ice can apparently kill goldfish (something to do with sound waves travelling more easily through water, so it sounds something like a bomb going off which in a two-foot pond would make anyone keel over in shock), so melting it is the only way, however silly you look. Actually, it makes me feel a bit like one of those Eskimos crouching on the snow keeping the fishing hole open. Though I don’t suppose they do it by watching a saucepan slowly capsizing into the water beneath.

All this hard work is for the benefit of Peanut and Mango, who have not been seen since about November. I’m hoping they’re tucked away under the slab we thoughtfully propped across two of the shelves in the pre-fabbed liner, snoozing away the winter (hibernation is beginning to seem unduly attractive by this stage in winter, I find, though I’d probably prefer not to do it in near-freezing water). I’m trying to resist the urge to drop a fishing line in there to find out how they are.

The irises and that fluffy grassy stuff – I think it’s Eriophorum angustifolium, aka cotton grass – are fine, and the waterlily died down well before the big freeze so I assume is also happily hibernating. But the water hyacinths have had it and are frozen in brown, semi-decayed death halfway in and out of the ice as I forgot to lift them and put them in a bucket in a frost-free greenhouse like I was meant to some time back in October.

Now I can’t remove them as they’re part of the icy scenery, and I’m just hoping they won’t have turned the water stagnant before it all defrosts again. My heart is in my mouth every day lest Peanut and Mango should one day be found to have joined them in icy suspension floating on the surface: but so far, so good.