A bit of an update on the fishpond’s progress… 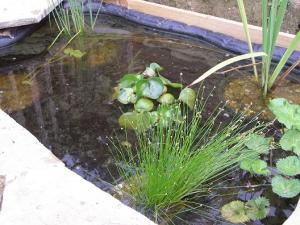 As so often seems to happen, we’ve done it all arse before elbow, having been a bit distracted by a sudden rush of hard landscaping in the last week or two. Things were rather brought to a head by the precipitate arrival of the fishies, which came from my mum’s pond where they were surplus to requirements. They couldn’t stay in the plastic storage box we’d brought them back from Wiltshire in, so I made an emergency dash to our local specialist aquatic centre for some greenery to make them feel at home.

At the risk of having a bit of a Colborn here, there was b***** all to choose from. It’s not like we only went to one, either: we’d already visited a mockery of a “specialist aquatic centre” on the way home from my mum’s, to find half a bench of sickly looking specimens riddled with shepherd’s purse and a tank full of dead waterlilies.

On to my local “aquatic centre”, and it was much the same story: badly-kept, ill-cared-for, tragic-looking plants which obviously played a poor second fiddle to the fish – particularly koi, for some reason that always escapes me – and to the manly-looking aquatic gadgets, pumps, bits of moulded plastic masquerading as fountains and other large and preferably electrically-operated paraphernalia. I couldn’t find a single waterlily I wanted to buy instead of put mercifully to sleep, so eventually I despatched my father-in-law, who lives in London, around every nursery in the city until he found a disease- and weed-free Nymphaea pygmaea (for very small ponds).

I know it’s probably not peak time for buying water plants, but all the same, that’s no excuse for such a messy and shoddy display. If you’re going to run your plant stock down, take the wretched things away from the sales benches: I’d rather see empty shelves than that sorry collection of cruelty cases.

It doesn’t have to be this way. One beacon – if a lonely one – of excellence which puts plants first and does them well is Waterside Nursery, a regular at the RHS shows. Its plants are multitudinous and beautiful, sometimes unusual, spectacularly well-cared for.

Sadly it’s in Leicestershire, around 100 miles from my front door: great for mail order, but if you’re being as disorganised as us, a bit of a detour. In the meantime we have to put up with these excuses for plant sellers. Why the aquatic industry short-changes us so badly on plants, when so many people adore their ponds, I cannot understand.

Anyway. By the way, there’s no picture of the fishies (who are called Peanut and Mango, for reasons best known to my 7- and 9-year-old), who have been given a nice rock for shelter and are consequently almost always under it. But I managed to snap the water snail, who is – equally inexplicably – known as Banana Corkscrew. 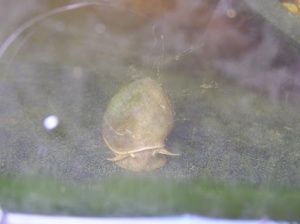 He’s doing a great job of eating all the algae so far, though I rather suspect him of doing an equally good job of eating the waterlily leaves. I just hope he (she? it?) doesn’t start multiplying, that’s all…