There’s one garden I look after which I am very, very nearly as much in love with as my own little patch. You’ll probably understand why when I tell you it’s a 17th-century courtyard garden which has been tended by the same lady for, I think, over half a century. I’ve been helping her look after it for a mere four years of that, give or take a month, but its magic has seeped under my skin: it’s not a place you ever want to leave.

The owner – now 90 – is a very instinctive gardener, tucking in a little poppy here or an astrantia there so the effect is entirely artless. What’s more, she knows when to leave well alone: it’s full of self-sown Erigeron karvinskianus tumbling over walls and (she calls it ‘Bouncing Bet’) and fumitory (Corydalis lutea) peeping its butter-yellow flowers out from cracks in the masonry.

This week when I went over there I hunted out my favourites of all her little babies, to be found in the very shadiest and dampest nooks and crannies and tucked into crumbling walls or lichen-covered stones throughout the garden. 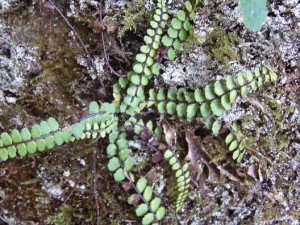 A little maidenhair spleenwort (Asplenium trichomanes) I think – my idents on ferns are more than a bit shaky at the best of times but when they’re this tiny (about 8cm across in this case) it’s even more iffy. But those wiry little black stems are like little necklaces hung with green jewels. 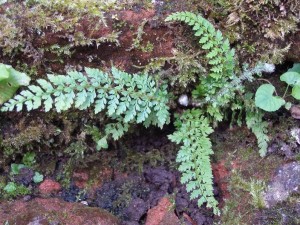 I’m entirely stumped by this one. I did think it was a lady fern (Athyrium felix-femina) but it’s a bit too feathery and not quite right somehow. But maybe that’s just how they are when they’re young. Anyone out there know for sure? 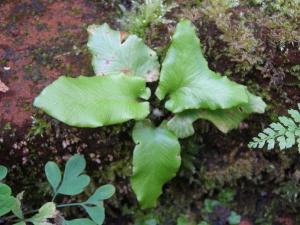 Not much doubt about what this is – it’s an Asplenium scolopendrium, the harts-tongue fern, an evergreen much beloved of plant designers as it obligingly stays (mostly) green all winter and puts up with dry conditions. I’d never seen it as a baby before – those little fat leaves are just too cute.
If I take nothing else from this garden, it’s this: the simple lesson to quit meddling. When nature throws up these little gems, who needs a gardener?