Nigel rose admirably to the challenge and guessed correctly no’s 1, 2, and most amazingly 4 – and gets half-marks for nearly guessing no. 5, too. Well done that man. Here for those who are curious is the low-down on last week’s idents:

Ruscus aculeatus – Butcher’s broom. Very useful plant to know as it grows in the deepest of deep shade and has some rather pretty red berries in autumn. Most interesting for me though was those flowers – the ‘leaves’ aren’t actually leaves at all, but modified flattened stems, and the flowers are borne right in the middle. Fascinating, and a little wierd. 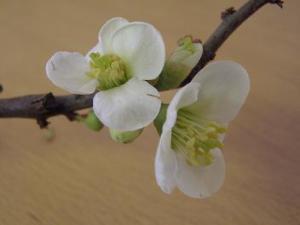 Chaenomeles speciosa ‘Nivalis’ – I used to grow this in my previous garden and the flowers are for me the most beautiful of all the Japanese quinces.

Scilla mischtschenkoana – Pretty little thing, isn’t it? If you want to know the difference between this and the earlier-flowering Chionodoxa, or ‘Glory of the Snow’, look at the petals – scillas have a blue stripe down the middle, whereas the Chionodoxa don’t. At least, I think that’s the way round…

Sequoiadendron giganteum – or more commonly, Californian redwood. Instantly recognisable as a tree – but this is the very lovely foliage. Slightly flattened and down-turned, and I think a bit of a revelation for those like me who haven’t got much further than looking with mouth agape at the trunk. 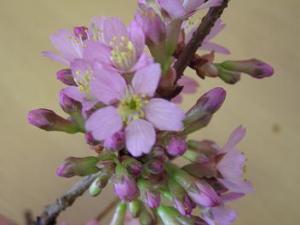 Prunus ‘Okame’ – as Nigel said, there are so many flowering cherries and this could have been pretty much any one of them, so not really fair, but then who said this had to be fair?

There isn’t an ident for this week – we’re in the middle of a huge project at the moment (which is doing my head in and using up nearly every spare evening – my family is forgetting what I look like). So I thought, since we’re having a pause, that I’d hand out a few virtual bouquets to you virtuoso plantsmen and women out there:

back with some more wickedly annoying teasers soon….

5 thoughts on “Identity parade #5 – the answers”