A quick tour of my so-called jungle garden (i.e. the place I so optimistically planted up with climate change anticipation plants last summer) reveals I didn’t exactly get out of the recent cold snap scot free. 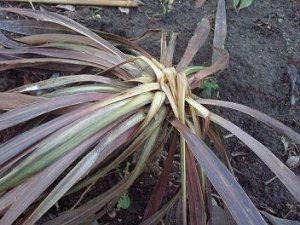 This is (or was) a purple cordyline. I was rather fond of it as it made a snazzy contrast with the libertias and hostas, to say nothing of a canna behind it, and gave me the pleasant illusion that I was quite good at putting plants together. I thought they were meant to be bone hardy, too.

…and my poor Astelia chathamica ‘Silver Spear’, lately of Chelsea 2008, which also looks to be less hardy than you would think.
Some of these might – just – come back, though I’m not sure they’ll ever be quite the same again. Now, here’s a quandary. do I press on and insist on a jungly area at the bottom of my garden anyway? (I’ll have my banana-mad eight-year-old daughter to answer to if I don’t). Do I resort to drought-tolerant Mediterranean plants only to have them washed away and drowned in a sea of mud every winter? Or do I plant a sea of English flowers and water them every five minutes all summer, also risking the customary deluge turning to a desert-like scorcher and the whole lot frazzling to a crisp as soon as I turn my back?
You know, this gardening lark isn’t as straightforward as it looks.