I mentioned some time ago that I’d taken over the school garden.

Well, in the way of these things, shortly after I took it on, they started building work which meant not only was everything on hold for more than a year, but also we lost half the garden before we’d even started.

You take these things on the chin, though, and in fact it’s all worked out OK in the end since now the work has finished, I know where we are and we can go forward. I got all inspired by the Dorset Cereals Edible Playground garden that won Hampton Court this year, and between me and various teachers and parents who should really know better, we’ve come up with a big and rather exciting scheme for developing a new space for the kids to grow lots of food in.

So before we started I thought I’d record what state it’s in at the moment – neglected in places, presentable-ish in others, but in need of a lot of work, hopefully from people large and small. 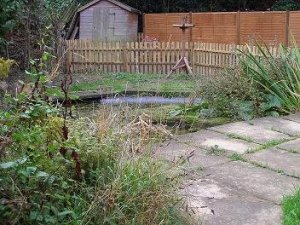 This is the wildlife pond – weedy, unkempt, and recently much larger. The bit on the other side of the picket fence is tarmac now, but it used to be garden. Never mind: there are plenty of bits left to have fun with, including a raised bed, a soon-to-be herb bed and a bog garden, as well as sundry weed-infested borders which once cleared will be open to inspiration. 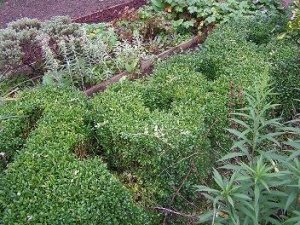 This is the (somewhat neglected and overgrown) Millennium Garden – can you see why? 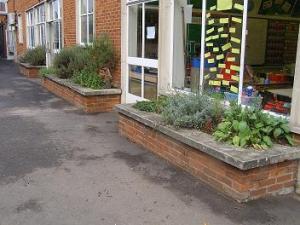 And these are the raised beds along the front of the school itself. Currently planted with a hotch-potch of different plants, and not in too bad a state, but one talented mum has now come up with a design involving box balls, a lot of alliums, some Geranium ‘Rozeanne’ and a few prostrate rosemaries, which will hopefully pull this lot together and make it look pretty good for most of the year. This is our first project – I’m going shopping next week if the PSA give me the green light. 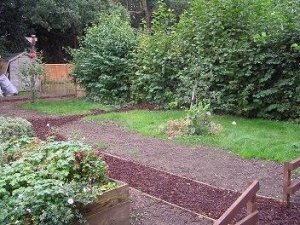 Finally – the bit everyone’s getting excited about. All the kids in the school, from 4-year-olds in reception to the big girls and boys in Year 6, are being given a design project in which they’re going to be asked to come up with loads of imaginative designs, from which we’ll select as much inspiration as we can cram in without making it too overcrowded. From this we’ll create our Kitchen Garden. The hedge behind it (a mixed wildlife hedge around the pond) is coming down by about half, which is a huge job for November, but I’m trying not to think about that too much: instead looking forward to lots of colourful drawings and some seriously good ideas!