Just got back from a week’s holiday in the Isle of Wight – lovely, thanks, and more of which later, but in the meantime I had a few pics from the Thompson & Morgan open day in Suffolk which I went to just before I left.

Now this is something of a fixture in most garden journalists’ calendars but it was the first time I’ve actually made it along. Bedding isn’t really my thing so I hadn’t really made it a priority before. How wrong can you be.

Now I’d better declare a blatant attempt at bribery on the part of the T&M people, armed as they were with oodles of freebies and a slap-up lunch. But – honest guv – I didn’t really need all the buttering up. This was an amazing display of gorgeous flowers which just bowled me over.

Not that there wasn’t any good old-fashioned traditional bedding: in fact there were buckets of it, including many in those awful gaudy candy-pink shades that old ladies love so much. However – stay with me here: in among the god-awful colour clashes there were some superb plants: ones which caught my eye included Begonia boliviensis ‘Bonfire’, in sizzling, sultry red, and much more subtle greeny-yellow Petunia ‘Susanna’ – as cool and reserved as the begonia was in-yer-face.

And here’s a close-up of the sexiest fuchsia ever – Fuchsia denticulata. I love species fuchsias. Must collect some more.

Bedding outside – they don’t bother with subtle colour combinations, do they? But don’t you love that millet (Pennisetum Purple Majesty)?

And here’s a close-up of the Nicotiana – it’s N. suaveolens and planted en masse like this creates an ethereal, airy effect like dancing fairies.

I liked this nasturtium, too – a sultry red with purple-tinged leaves called ‘Cobra’. They gave us a packet of seeds in with the freebies so I’ll look forward to growing it next year. 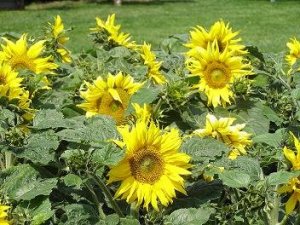 These sunflowers (‘Irish Eyes’) made me smile, too. They were a bit small for my liking – about thigh-height – but looked great in a big massed planting like this.

My only complaint was that we didn’t get to see more of this – the trials field, where T&M develop their new varieties, so you get a sneak preview of varieties in development. Quite apart from anything else, the whole (highly commercial) process of breeding new variations that might become tomorrow’s stalwarts is fascinating.

Still – maybe next year! I haven’t even mentioned the fruit & veg, either – lots of great ideas (standard-trained fig, anyone?) The trials are open to the public too – T&M’s open day has been and gone, but all the major seed companies do it so get along to one if you possibly can (even if you are a bit sniffy about bedding!)