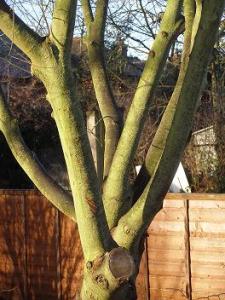 At last – the sun is shining, the frost has stopped (for the time being at least) and I can get outside again. I realised this morning that what with a combination of bad weather and Christmas, I only gardened one week in December… that must be some sort of record for me.

One thing I did do in my own garden – which didn’t require treading on the frosted grass, which at one point didn’t defrost for five days in a row – was to sort out my willow tree. This is the goat willow (Salix caprea) that’s by my pond – you can see another picture of it covered rather fetchingly in snow here. You might be able to see from the earlier picture that it was overhanging the fence quite considerably – well on the other side of the fence happens to be my cut flower garden, so it was quite urgent that I take out the overhanging branches and let in a bit more light.

The depths of winter are a great time for pruning trees – you can really see what you’re doing, and create a good, balanced outline. You can also get a good look at the general health of the branches, and those which are crossing other branches or generally growing in the wrong direction become very obvious when they’re not hidden by leaves. In this case, I aimed for quite a tall, upright shape which was well-balanced but didn’t cast too wide a shadow.

When pruning trees, you need to take care not to cut too close to the trunk. If you look at where a side branch leaves the main branch or trunk, you’ll see there’s an obvious junction. This is called the collar – it appears as a slight swelling between trunk and branch. You should cut on the branch side of the collar – not through it, or on the other side of it, as it contains lots of good hormones which promote the rapid healing of the wound. You can see where I’ve done this on the big cut facing you in the picture.

It’s a good idea too to cut quite close to the collar, as if you leave too much of the branch on the tree, it’ll die back and could rot and let in disease – I could have cut fractionally closer here, in fact, and it’s not always easy to get it absolutely right. One tip is to cut away the branch little by little, from the far end back towards the trunk, so you get several chances to cut it to exactly the right point.