As I mentioned a few days back, I had the fantastic experience of spending a whole week at the RHS Chelsea Flower Show just recently. And what a show it was. I had been a bit worried that I’d be all jaded this year – I did the same thing last year and was all wide-eyed and star-struck by it all, so I thought this year I’d be all “been there, done that”. I needn’t have been concerned. It was just as exciting to be there, the atmosphere was just as electric, and all those mouthwatering, beautiful plants…

The thing Chelsea did to me last year and has done again is to give me a sense of my own insignificance. I tend to strut around here at home thinking, I’m a professional gardener, I know it all – but when you go to Chelsea, you realise what an amateur you are in comparison to these utterly dedicated plantaholics. They’re so talented, too: the perfection it takes to get a gold medal at Chelsea has to be seen to be believed. When you’ve watched someone spend a whole hour teasing dead strands from a Stipa tenuissima, you know you’re in the presence of the highest standards it’s possible to imagine.

So, suitably humbled, I thought I’d just share my favourite Chelsea gardens from this year’s show. There were some real crackers: nothing head-and-shoulders above the rest, like Tom Stuart-Smith’s garden last year, but several which really grew on you (like Jinny Blom’s Laurent-Perrier Garden, and Ulf Nordfjell’s Tribute to Linnaeus). And, just for the record – I entirely agreed with the RHS judges in giving the Best in Show award to Sarah Eberle’s 600 Years with Bradstone. It was the only truly original garden there, executed with panache and daring, to say nothing of excellence: and every time you looked at it, you saw something else. You can’t ask more of a Chelsea garden than that. 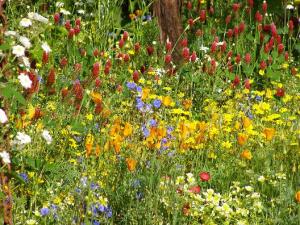 This was Kate Frey’s garden for Fetzer Vineyards. Have you ever seen such wonderful flowers? The gorgeous blue ones were Phacelia campanularia – a new one to me, but a native wildflower in California. Kate – a lovely, gentle person who you can tell was just born to be a gardener – is a master at recreating wild landscapes like this: you can’t really believe such beauty is possible on such a small scale. 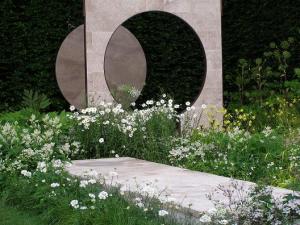 This was Jinny Blom’s garden for Laurent-Perrier. Jinny was over the moon about her gold medal – it’s the first time she’s struck gold after several years of trying. You could see why, too: the planting in this garden was ultra-sophisticated and very, very subtle, and she’d obviously put a huge amount of thought into it. And that moongate sculpture was something else: it moved around the garden with you. Fabulous. 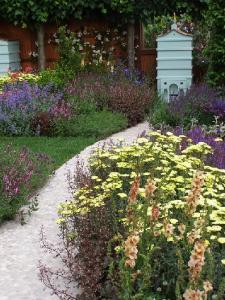 This was another super-sophisticated garden with some really accomplished planting – I thought it had a good shot at Best in Show had the judges been playing safe. Robert Myers reflected the old, traditional nature of the Fortnum & Mason department store which sponsored the garden – but at no point did his charming garden feel stuffy. The garden was full of subtle little touches of brilliance: behind those beehives (which provided a major talking-point at the show) that fencing is made of old Fortnum & Mason hamper lids. And the clock at the back was set to seven minutes past five – or 1707 in 24-hour clock, the year Fortnum & Mason was founded. 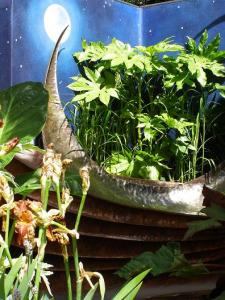 Tiggy Salt’s small courtyard garden, Where the Wild Things Are, was a big hit, with adults and children alike. This is pure Chelsea theatre: the night sky formed a background to a recreation of Maurice Sendak’s classic children’s book, and a wonderful copper boat was there to take Max from his chamomile bed across to the “forest” of Fatsia japonica. It was magical. 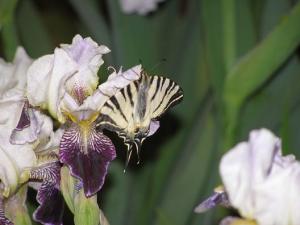 And an odd little snippet: this Italian Scarce Swallowtail butterfly hatched out halfway through the show, having been imported as a chrysalis on a yew at the Romantic Gardens topiary display in the Great Pavilion. It fluttered over to the Claire Austin Hardy Plants display next door – presumably the irises looked prettier – before finally flying off. Apparently only a handful have ever been seen in the UK before. Look out for this one in SW3 for a few weeks to come!