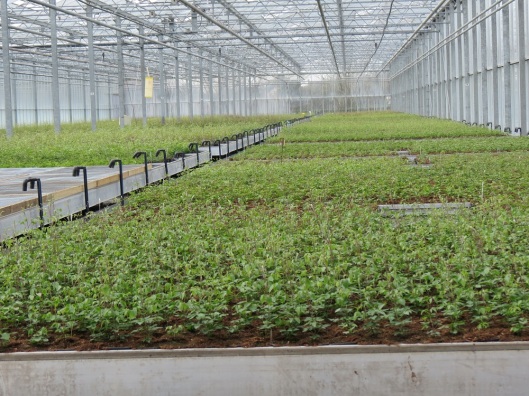 As privileges go, it doesn’t get much better than a personal guided tour around Guernsey Clematis by the great Raymond Evison himself.

I have met Raymond on lots of occasions at Chelsea: he is a true gentleman, of the unfailingly courteous kind, and his air of urbane charm rather disguises the fact that he is a sharp and very savvy businessman. He has succeeded in keeping his world-beating clematis nursery not only going but wildly successful, while keeping it on its home island of Guernsey.

It’s a feat many good plantsmen haven’t been able to pull off, and Raymond himself admits it hasn’t been easy, but any business that supplies 25% of the world’s – yes, the world’s – clematis supply is a success by anyone’s standards.

It was fascinating to see how you go about producing millions and millions of top-quality plants, while also running a commercial breeding operation which is about the only one at the moment producing new clematis anywhere. And all from an island nine miles by five miles with an erratic ferry service. Respect.
Here’s how he does it: 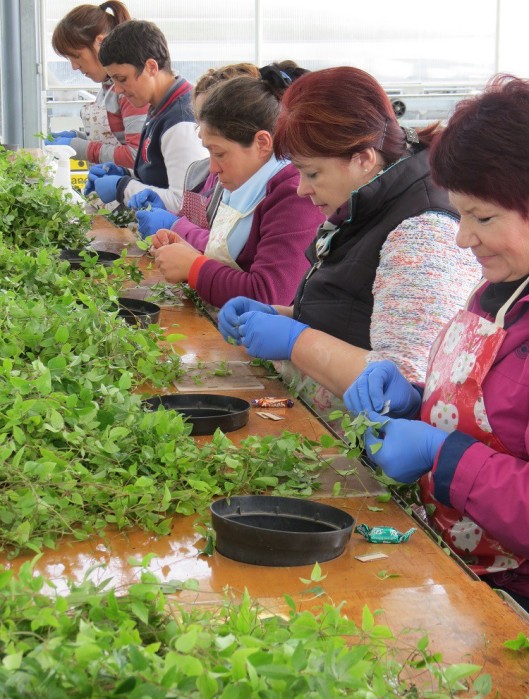 Once the stock plants (in the photo above) have begun putting out serious growth in spring, they’re given a haircut by something similar to a huge horizontal hedgecutter hanging off bars across the greenhouse roof. This slices off the top 15cm or so, ready to be turned into cuttings by rows of ladies wielding very sharp razorblades. 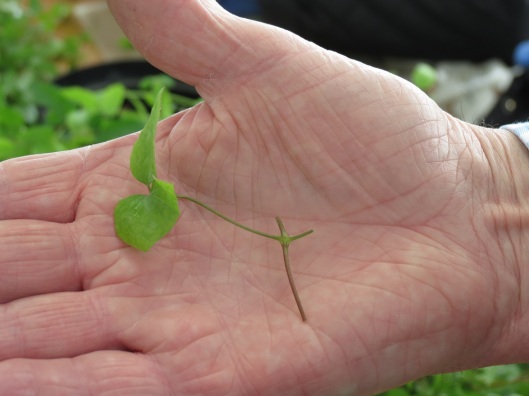 Here’s what they produce: doesn’t look much, does it? It’s an internodal cutting, and those ladies will be producing 25,000-40,000 of them every single day. 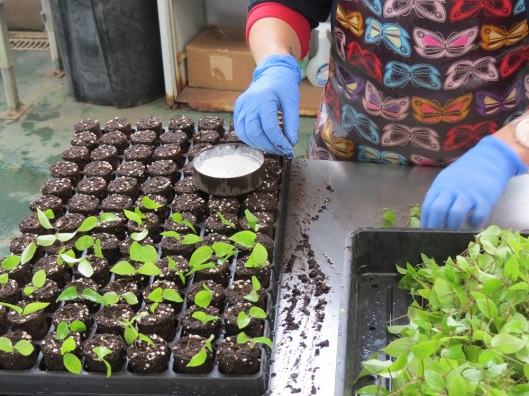 Stage two and each cutting is popped into Raymond’s home-made equivalent of the Jiffy-7: a bit like a soil block. The making of these is automated too – in what Raymond calls the ‘sausage machine’. 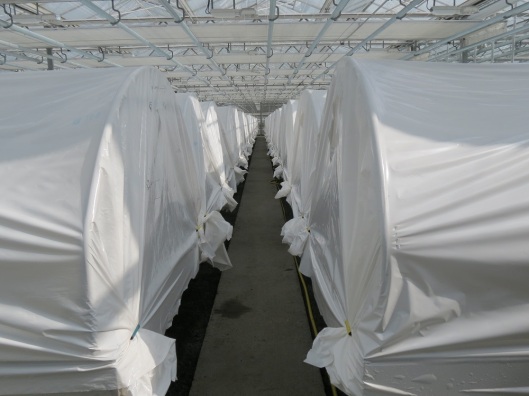 Next stop, a whole greenhouse full of white polythene-covered propagators. These have an opening at one end so you can see in: they’re checked daily and when there are signs of growth (usually within three weeks) there will be more ventilation cuts made in the polythene until the whole thing is opened up. 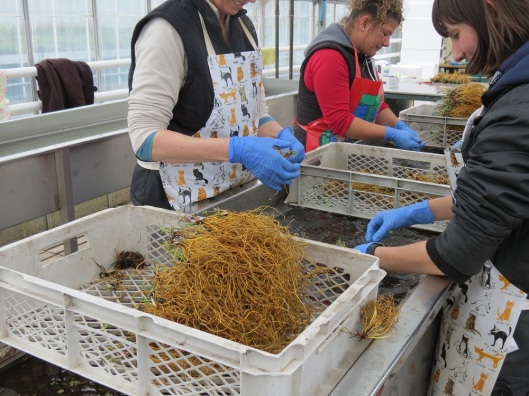 Plants ready for despatch: once dug up from the beds, the roots are washed and graded, and the leaves cut off. Then they go over to a man in a corner with a microscope: he’ll check plants from each batch for any tiny interlopers which might be trying to hitch a lift (Western flower thrip is a particular menace, apparently, and all but impossible to spot unless you’re at the business end of a microscope)

And here’s the finished product, passed as pest- and disease-free, 600 in a box, and in this case off to North Caroline in the US to be potted up and grown on before sale. They don’t look much like clematis at the moment: but give them a year and they’ll be smothered in flowers and looking a million dollars. Amazing.

I did get a little look at the breeding operation too, but I’m afraid Raymond would have to shoot me if I revealed what he’s up to. A few facts and figures though:

• 2,500 crosses a year, done via hand pollination with paintbrushes
• from which 25,000-35,000 seeds sown – about a third germinate
• About 6,000-8,000 new seedlings are grown on and assessed for several years (it takes 8-10 years to produce a new clematis variety)
• qualities which are prized include ability to flower up the stem (rather than just at the top), compact, with a ‘pick me up and buy me’ quality: clematis have to flower within the first 60cm or they won’t sell in garden centres
• Current breeding goals are better reds, truer blues, as many doubles as possible, and a new strain of late-flowering, small-flowered clematis which bloom earlier in the season too

What I can say is that he’s releasing two new varieties at Chelsea this year: Volunteer, a container clematis in delicate mauve streaked plum purple; and Tekla, a deep pinky-red with deep red anthers and a late spring flowerer with a second flush in mid to late summer. It grows to 1.5m (5ft) and like all Raymond’s clematis is smothered in flowers from top to bottom.

Both will be on the Guernsey Clematis Chelsea stand: and do look out for the plant support Raymond has the Volunteer growing through. It’s not often I get excited about a plant support, but this one is a work of art and a thing of beauty. That’s all I’m saying.