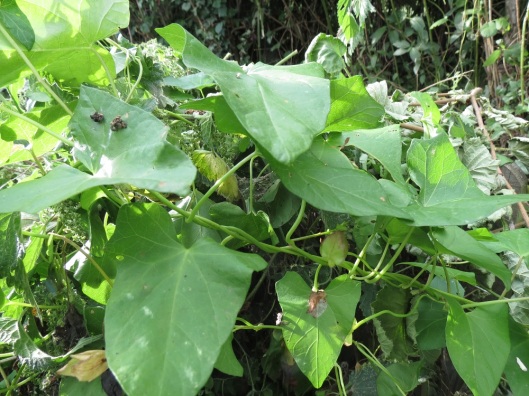 Not convolvulus at all, but the far, far worse Calystegia sepium

My life is entangled with bindweed roots. They writhe through my dreams and wind around my fingers; every fork full of soil turns up another spaghetti nest of fat white worms reaching deep into the ground.

I have always gardened with bindweed. It is, for me anyway, a fact of horticultural life. Other perennial weeds I find easier to live with: couch grass is a pain, but at least it grows in between your plants and the roots don’t break so easily, so they pull out in a hawser rope that, if you pull carefully and steadily, comes away cleanly. It’s so satisfying to weed: each time a bit comes free of the soil it’s an intense pleasure, like peeling off an intact strip of sunburnt skin. Sorry. But you know what I mean.

But bindweed breaks easily: however thick the rope you pull from the ground, however carefully you work it free, it always, always breaks. It is a plant killer, creeping up and strangling them with wire-like stems until they croak into submission. It wraps itself around their roots like some subterranean boa constrictor. And you can never, never get rid of it.

I’ve become an accidental expert on bindweed over the years. For example: though we know bindweed as convolvulus, the better known one (the one that strangles your plants) isn’t convolvulus at all but Calystegia, specifically C. sepium.

The true convolvulus is a much milder version (though still very annoying in the garden), the field bindweed, Convolvulus arvensis. It’s smaller, and grows sideways more readily than upwards, though it will climb a handy stalk if it really gets going.

My terrace garden is infested with it: if you work your fingers under the crown and pull, the central long root untwines like a coil out of the ground (snapping, of course, to regenerate again). It comes back again within a matter of a week or two and makes mats across the ground, and (unlike Calystegia) spreads from seed as readily as from roots, so there’s no getting rid of it.

Calystegia sepium, aka hedge bindweed, is altogether worse, a plant-murdering thug of a weed. It would be quite pretty if it wasn’t such a psychopath: heart-shaped leaves, showy white bell-shaped flowers. But it is hell-bent on garden domination and lets nothing, but nothing stand in its path.

I have, over the years, given up trying to get rid of it. You simply can’t. I battled it for eight long years in my previous garden: I tried forking it out endlessly, that cane trick (train it up a cane, blitz with glyphosate), stuffing it in jamjars then spraying into that, black plastic, the lot. Nothing worked: as inevitably as the first frosts of winter, back it came. There is a (possibly apocryphal) tale of a man who dug out his city garden to a depth of two metres to get rid of the bindweed, and sieved every bit of soil he put back to make sure he removed the tiniest shred of root. He put his garden back together again and within two years the bindweed was back stronger than ever. So don’t try to banish it: you will just spend a lot of time raging and frustrate yourself into an early grave (liberally laced with bindweed roots after a few weeks, no doubt).

I’ve noticed a few things about bindweed in my long acquaintance with it: first, it hates cultivated soil and thrives best in that patch of ground you haven’t touched in a few months. So if you keep planting and sowing, moving and dividing, it rarely takes hold: it is telling that in my main veg garden, where I’m constantly cultivating, the bindweed is struggling to make inroads from the hedgerows, while in the more ornamental, mostly permanently planted bit it is much more rampant.

Second, if you dig it out, it comes back twice as vigorously. If you just pull out the stem by hand (don’t cut it) it just returns as a single stem. So I don’t try to fork it out any more.

Instead, I reason that if you don’t have to look at it, it doesn’t really matter what’s going on under the ground. So I do my best to pull out strands by hand, as above, whenever I see them: and in between I hoe, keeping the ground moving and cultivated and chopping off the heads (rather satisfyingly) of any bindweed that might be impertinent enough to poke its nose above ground level.

Amazingly, that has all but eliminated a fairly serious bindweed infestation in one garden I look after: I’m sure it’s all still there, biding its time till the gardener goes away again, but the borders are definitely bindweed-free, to look at at least.

In my own garden it’s a bit trickier: I don’t have as much time there as I get paid to spend in other people’s gardens, so the scorched-earth policy is a bit more hit and miss. In those areas I get to regularly, though, you wouldn’t think there was a bindweed army just beneath the surface. And as far as I’m concerned, if you can’t see it, it ain’t there. Sorted.