I got a lovely little parcel in the post the other day. 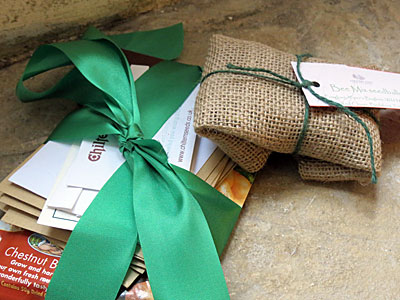 I do love a good seed swap. This is the second year I’ve been taking part in this one: it’s run by the lovely Carl Legge, who lives in an obscure bit of Wales I’d only happened to have heard of because a breed of sheep is named after it (obscure bits of Wales are always heartbreakingly beautiful so that’s a good thing).

The idea of Seedy Penpals is pretty straightforward: you put your name down, you’re paired with another equally seed-obsessed gardener, and then given a (different) swapee – someone to send your own spare seeds to.

And this is the result. I don’t know what it is with beautiful packaging this year but everyone’s into it. I got the most beautiful packet of sweetpea seeds earlier this year from the wonderful Ursula over at Easton Walled Gardens. Well, I say packet: it was actually a very stylish flat tin, of the matt silver cigar sort, and inside the packets of sweetpeas were laid lovingly in a beautifully-folded piece of brown paper. It all looked so perfect I could hardly bear to break the seal and sow the seeds (though I got over that and they’re now in the altogether more prosaic surroundings of a load of old loo rolls full of compost in the greenhouse, soon, I hope, to germinate).

And my wonderful Seedy Penpal, Cally of Countrygate Gardens in Wiltshire (and a lady after my own heart: she has done a lot of what I one day dream of doing) clearly has an eye for a good ribbon, too. She’s taken such trouble to bind up my seeds so beautifully: it gives a pile of seed packets the delicious anticipation of a birthday present.

I particularly loved the bee mix seedballs – you can buy them from Cally (hunt down her phone number on the above website). Full of foxgoves, viper’s bugloss, wild marjoram, red clover and birdsfoot trefoil they might have been designed for my chalky soil. And they came wrapped in an artless square of hessian tied in string: it’s the little touches that make all the difference, you see.

Inside were – quite literally – seedballs. I’m very intrigued to find out if these work: the seeds inside are apparently mixed with clay, compost and chilli powder (to deter pests) and made into a little pellet about the size of an aniseed ball. I think you’re meant to sow the whole thing. It says to scatter them on the ground, but each pellet contains thousands of seeds… well. It’s not gardening as I know it: but I’m willing to give it a try. I shall report back.

And what were the other goodies in my little bundle of fun? Well: ‘Cosmic Purple’ carrot, which I’ve wanted to grow for ages (it’s one of the original heirloom purple carrots, though I think the ‘Cosmic’ bit probably came later); white and blue love-in-a-mist; some scallop summer squash (yay!), cleome, calendula, molucella and gypsophila; orange-scented thyme to add to my collection; some melons; and – get this – mushrooms! And it says all you need is horse manure. I’ve got loads, and loads, and loads of that thanks to my two little ponies, so I’m away. It sounds like a bit of a faff to get it started, but if home-grown chestnut mushrooms are the result, I’m game.

Thank you, Cally: you’ve sown the seeds (pun intended) for a wonderful season to come. And thanks also to Carl, for putting in the considerable work involved in setting up the swap in the first place. See you next year!

I have to admit to being a bit fascinated by mushrooms in a spooky sort of way. For a start, they’re neither animal nor plant – which in itself gives them a whiff of the Martian invader. And there are so many dark tales of horrible deaths as a result of mushroom poisoning that they actually are just as menacing as they look half the time. On the other hand, if you’ve ever tasted fresh mushrooms straight from the forest – for me, it was ceps cooked within minutes of (someone else) picking them in Gascony – well, you’ve known true happiness. These are beings of real mystery and magic, and you don’t even have to go far to find them.

My local mushroom colony is in the woods frequented by the dog-walking brigade (of which I’m one) – not exactly a secret location way off the beaten track. So I got very excited when I found what I think may be a Morel – famous for being quite amazingly delicious and one of those mushrooms that chefs go crazy for. Here it is:

It was sitting quite unnoticed at the foot of a Scots pine, right by the path. Actually I’m not absolutely sure it’s a Morel (though it looks just like one) and there are enough deadly poisonous fungi masquerading as quite edible ones around (more proof that they have something of the night about them) to make me hesitate before snaffling it and frying it up with a few fresh eggs. My golden rule with mushrooms in the wild is Never Eat One unless you have someone who really knows what they’re talking about with you. It’s a bit tempting this time, though. Anyone know a tame mycologist?