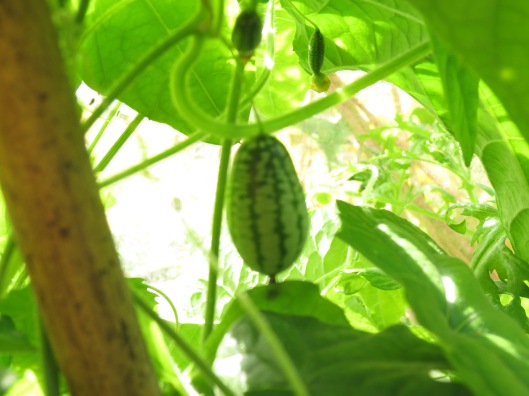 Cucamelons are the latest Big Thing in veg growing: everyone seems to have one or two plants about the place somewhere. So I gave it a try this year, at last, after some years of wondering what all the fuss was about.

I’m still wondering, a bit: the main benefit I can see so far is the cute value.

Cucamelons, aka Melothria scabra, are related to cucumbers, but they come from Mexico. There is in fact lots of argument among botanists as to exactly which bit of the cucumber family it should belong in, as it also counts West African gourds in its ancestry: expect one of those annoying name changes before long. 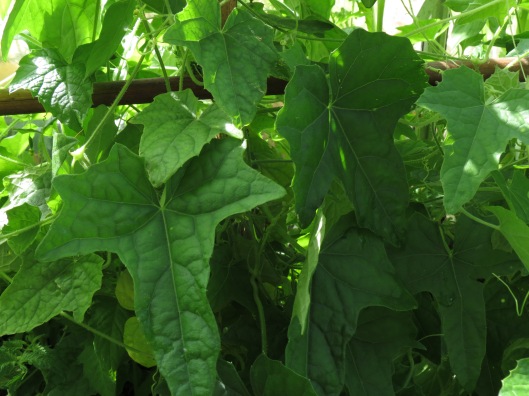 I germinated the seed with ease, some time back in April, and they romped away, making slightly weedy-looking tangles of leaf, stem and tendril. They’re much less hefty than a cucumber: more like an annual climber in habit. As a result, they’re also much more difficult to train, quickly forming unruly nests of impenetrable tangle (in fact I gave up in the end and just tied them to their supports as best I could).

You don’t have to grow them in a greenhouse, as I’ve done: they actually prefer slightly cooler conditions than a cucumber, so are happy outside in a sunny spot, too. I decided to err on the side of caution, though, and popped them in on the opposite side to my much heavier-looking cucumber plants.

They started fruiting about a month ago. Teeny-tiny little watermelons, no more than 3cm long and 1cm across, striped prettily and small enough to pop whole into your mouth. They definitely taste of cucumber, but with a little tang of citrussy lemon that’s really very pleasant.

But snacks, so far, they have remained. They aren’t cropping that heavily at the moment (though we still have a couple of growing months and you never know). I’m a bit nonplussed as to what else to do with them, to be honest: a quick Google tells me you can sprinkle them on salads, serve them in cocktails or among olives as a bar snack, or (better) try them in a salsa – come to think of it they aren’t radically different from tomatilloes in flavour, just smaller. And you can pickle them, too.

Well – ours is not really a bar snack kind of household, so we’re mostly just putting them in lunch boxes and picnics at the moment or just leaving them lying around in bowls for people to pick at. Besides, I haven’t got enough fruits to experiment with different dishes just yet. On the plus side, they’re almost completely pest and disease free – my cukes are just starting to yellow with red spider mite (as they always do at this time of year) yet the cucamelons are still brilliant green and perky. And they’re the kind of thing that grows just about anywhere, so you can just see them dangling from a hanging basket, say, or in a vertical planting system draped down a wall.

But in a good productive patch of loam in your greenhouse? Well, just now, I’m a bit ‘meh’ about them so far. Pretty, yes; curiosity value, tick, and they really are very cute – but I’m slightly resenting having handed them good growing space. I’d rather grow watermelons. Or cucumbers.