One of the gardens I work in I refer to – possibly slightly rudely – as the chicken garden, mainly because whenever I go there I am surrounded by a bevy of under-gardeners in the form of a dozen or so hens.

They are the most free-range, happy hens I have ever met, despite being apparently totally unprotected from foxes: they live at the edge of a very rural village, fields all around, a few neighbours but nothing that would stop any self-respecting fox in search of his tea.

But – and I have all fingers and toes crossed and touching wood as I type – they are all still very much alive. And that’s because of the four little oddities which bustle around with them.

These are the first guineafowl I have ever been at close quarters with, and they’re quite captivating. They look awful: they are possibly, in fact, the ugliest birds in existence from the neck up, where they bear more than a passing resemblance to a small and scruffy turkey.

From the neck down they are absolutely gorgeous: fluffy and puffy like great balls of beautifully patterned eiderdown. It’s as if whoever put them together got distracted halfway through and picked up the wrong pattern when they came back to the job.

They are also enormous characters. They are given to doing very odd things: yellow builder’s bags bring them out in mild hysteria and they will stand there for hours attacking it determinedly and ferociously. Cars suffer the same fate.

But best of all (except for the neighbours) they make a huge racket whenever anything at all alarming comes near. It’s hard to describe the noise: a bit like a cross between an old fashioned car horn and a chronically creaky door. If that means nothing to you, just have a listen to this.

But it’s really, really loud. If you were a fox and you came within a snifter of this lot everyone for about fifty square miles would know all about it.

Keeping guineafowl is a little different from chickens. They’re very flighty, and not particularly tame (though they will follow you around the garden like a phalanx of little guard turkeys). They are extremely free range, wandering much further than a chicken would – these ones regularly go walkabout around the village. And they won’t roost in a house, preferring to fly up into trees, and lay their eggs all over the place. If you can find them, they’re small but worth having – a bit like a bantam’s.

And of course to include them in your self-sufficiency repertoire to the full you really ought to eat them. Guineafowl are among the most prized of poultry delicacies: I’m told the meat is rather like pheasant.

I couldn’t quite bring myself to do that – haven’t even screwed up the courage to despatch a chicken yet – and the eggs are too small to make me want to give them the field room. But the guard-turkey thing: that’s worth having. You could save yourself an awful lot of chicken wire with a few of these. Not to mention the cost of a TV licence too: guineafowl are much more fun to watch.

You can visit these particular ones yourself if you happen to be down these parts: they live at The Beeches B&B, and a very fine and beautiful place it is too.

I went to the Edible Garden Show last Friday.

I was going to tell you all about it. On, say, about Saturday.

Could have done with this advice this week, really

Then Sunday came along and it was lovely and sunny outside and my first earlies were just itching to get in the ground and… well….

So it turned into Monday. And there was a big deadline going on and panicky emails flying.

And then Tuesday came around and…. well, you get the picture. 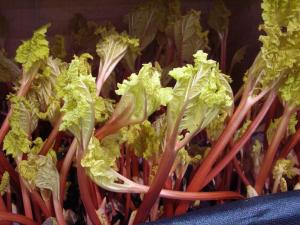 A fine crop of forced rhubarb at the Potting Shed display

So I meant to write a much better, more pertinent, more insightful post; one which highlighted a few of the rather gorgeous things at the show, like Joy Michaud’s covetable dark purple leaved chilli seedlings (new variety: ‘Fairy Lights’ – one of which is now snuggled down in a 10cm pot in my greenhouse) and the funky (but possibly rather impractical) water butt on show at the Urban Allotment stand.

I meant to give some pithy comments about how the show had a bit of growing into itself to do: the venue was small and a little on the gloomy side (taking pictures was an interesting exercise in holding the camera still long enough for the agonisingly slow shutter speed to go through its paces).

Yeeeesss…. photography was not easy in these conditions. In focus, these are the rather wonderful ‘Fairy Lights’ chillies I failed to resist

And it tried to be all things to all (wo)men: cookery shows jostled shoulders with James Wong and his Incredible Edibles, just a short stone’s throw from a tiny marquee full of snuffly pigs, impossibly fluffy chickens and slightly smelly goats (are there any other kind?). And for me there wasn’t enough of anything.

Inbuilt crop protection from Home Grown Revolution: practical, sturdy, but why do things made for allotments have to be so darn ugly?

I meant to express the hope that next year, they’ll do the same thing again, but this time they won’t dramatically underestimate the level of interest: when I arrived, ten minutes before the show even opened, the carpark was already packed and there was a queue out of the door. So much for the GYO movement peaking. Next year I’m hoping to see a venue triple the size (and preferably at least partly outside in deference to people taking photographs).

Instead you will have to read the eminent Emma Cooper, who was also there and got her act together far better than me, as well as bagging the most adorable piggy photo ever (although I think her other half may have had something to do with that).

And if you didn’t make it to Stoneleigh Park yourself, you can be transported right there, courtesy of the National Farmers’ Union, with a little film which I shall now shamelessly borrow.

But although it’s a week out of date, and like too-old cheeses the joke is a little stale, I couldn’t resist sharing this: it tickled me pink (though I am easily tickled).

Well…. it does say ‘Invisible’, but I think they may be taking things a little literally…