The veg garden is looking exceptionally woolly and wind-blown at the moment as it subsides gradually into its winter hibernation: good sprouts under them nets though

It’s been November for a whole four weeks now. Season of dreary rain and hat-snatching wind: season of no gardening and damply sloshing wellington boots and mud and dead brown sadly broken stems.

But let’s not get depressed. There are still reasons to be cheerful (honest!): 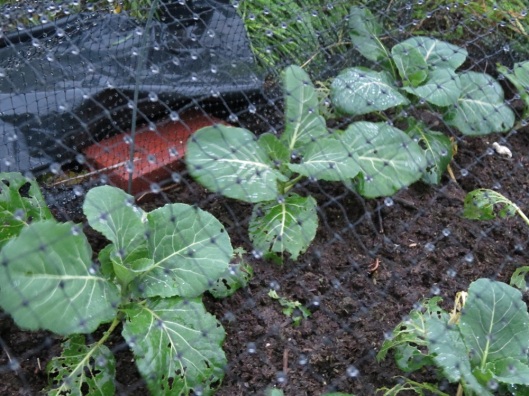 …and the spring cabbages are coming along nicely 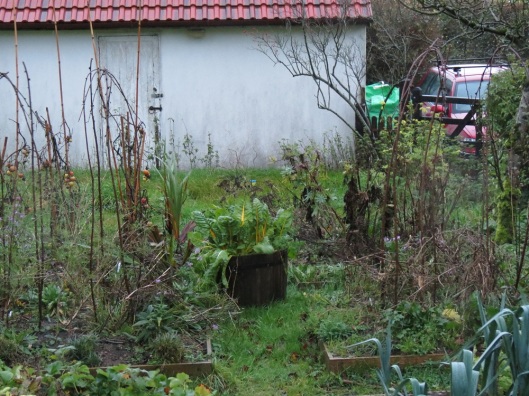 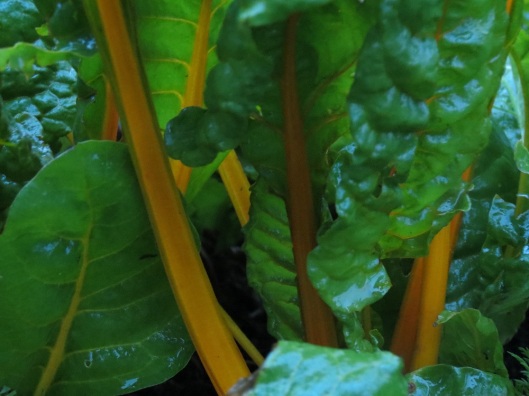 …but even on the drabbest of days these two cheer me up. Ewok and Custard, enjoying their winter break eating the hedges and occasionally the lawn (the bit they’re meant to eat)

My garlic has turned ginger. And not in a good way.

It happened just about overnight, a few weeks ago. One day I had perfectly healthy, sturdy garlic shoots: the next day the foliage was a bilious shade of orange. On closer inspection, it was covered in little raised bumps and pustules the exact same shade as rusty metal. There are few diseases more easily identifiable.

I’m reliably informed by Wikipedia that there are 7000 species of rust. I can entirely believe it. It’s one of the most common fungal diseases you can get in the veg garden, or indeed anywhere in the garden: I’ve had rust on my hollyhocks too, and it also affects pelargoniums, mint, lawns, fuchsias and pear trees (this last with the rather eccentric habit of spending part of its lifecycle on juniper bushes – so you need both plants for it to flourish).

On the plus side, each type of rust is very, very specialised. So I can’t blame the hollyhocks for infecting my garlic: hollyhock rust (Puccinia malvacearum) only likes hollyhocks. This is garlic rust, Puccinia allii, and it mainly likes leeks and garlic (it can also infect onions, but for some unexplained reason chooses not to in the UK: perhaps it just finds garlic tastier. All I know is that my onion crops are growing blithely alongside the blighted garlic, their normal healthy shade of dark green). [read more…]

Though I say it myself, I’ve been doing rather well with saving seed this year.

I’ve had a go with peas and beans before – they’re the beginners’ babysteps of seed as they just obligingly stay in the pods and dry themselves.

But this year I’ve got all ambitious. Here are my leeks from last year, which got left over in a container on my patio (I was having an experiment with growing veg in pots last year – it doesn’t work well for leeks, at least not in my garden where they’ve stayed spring-onion slender).

First of all, they’ve been the most beautiful allium blooms in the garden for the last month. They opened after the main allium display was over and have been flowering their socks off very charmingly ever since. It’s given me all sorts of interesting ideas for the main flower borders.

But more to the point, there are seeds in them thar flowerheads and I intend to let them dry and then collect them by muffling them in paper bags, turning them upside down and shaking vigorously. Then I’ll see what I end up with next year – they won’t come true, but then these were a fairly bog-standard leek variety so that shouldn’t be a problem.

Now these have been delighting me since early spring – this is the dried version, but in full flower it was a glorious brassy yellow umbel borne fully 6 feet above ground.

For those who haven’t already guessed: it’s a parsnip. And a truly lovely one at that. The only slight setback is that it’s covered in blackfly – can’t think what they’re finding to eat in those papery stems. It’s keeping the ladybirds happy, but I don’t know if it’s going to affect how good the seed is.

And this has been a real surprise: I munched my way through the kale last winter (it’s “Dwarf Green Curled”, or rather, was) but sort of forgot to take the plants out in the spring rush, and they’ve flowered.

Brassica flowers all look much the same – nice enough, but yellow flowers which are a bit too straggly to be called beautiful. The seedheads are something else though: architectural and full of texture (and, of course, seeds). Again, they’re very tall – not quite at parsnip height but still a good five foot.

They’re now very dry and brittle and due to snap open at any moment – I really must capture a branch or two and upend them into a bag before they explode all over the place and the seeds are lost to the four winds.

Here’s a glimpse of what’s inside: they break open just like peas in a pod to reveal those very typical brassica seeds, each with its own little dent in the soft white down that coats the inside of each pod.

It’s all a rather wonderful experiment, and I’m finding it a bit of a revelation that not only has it given me free seed for next year – it’s also made me look at my veg through new eyes. They may be confined to the allotment this year, but next year I think they’ll be making a bid for the borders…