So farewell then, Chelsea, for another year. Just in case you’re suffering a little Chelsea withdrawal, here are a few ideas I spotted among the hi-falutin’ designery and general razzmatazz, the kind of Chelsea inspiration that’s actually not that difficult to recreate at home.

Chelsea is often criticised for not being relevant to ‘ordinary’ gardeners: but I think there’s plenty of inspiration that translates directly into the average back yard. You just have to know where to look. 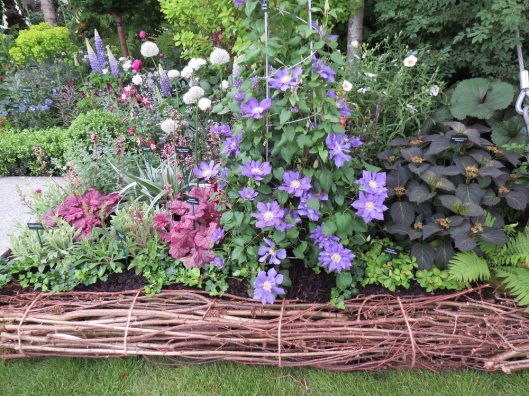 Hazel bundle edging: A simple (and cheap) but effective way to edge beds and borders, as seen on Sarah Eberle’s design for Hillier’s in the Pavilion. Wonderful for wildlife, too.

Make your logpile into a garden feature: Logpiles are a haven for wildlife, from frogs and toads to ground beetles, but they’re usually a bit of an eyesore and best tucked away where they can’t be seen. Unless you do what Nigel Dunnett did in the RHS Greening Grey Britain garden and cover them in plants like a kind of garden sculpture.

Match your plants to your sculptures: As seen on the Seedlip Garden, where the coppery tones of Geum ‘Totally Tangerine’ toned in perfectly with the funky artwork.

Sheds without windows: Why be a norm? Rather than going to the expense of fitting your shed with boring old windows, turn one side into a shelving unit instead and display your prettiest glassware and choice flowers instead. As seen on the Anneke Rice Colour Cutting Garden. 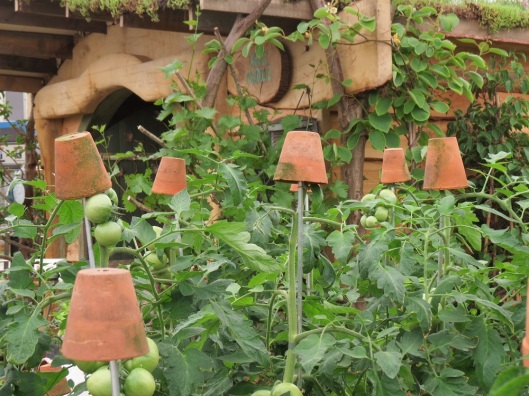 Use clay pots as cane toppers: How pretty is this? A great way to stop yourself poking your eyes out while weeding the tomatoes, spotted on the Pennard Plants stand in the Pavilion.

Clothe your sheds: Another great shed idea, this time spotted on the Horticulture Trades Association exhibit in the Pavilion. They used a planting pocket system to cover one end with strawberries and the side wall with a patchwork of different thyme. The roof was pretty cool too. A whole lot better than looking at a load of shiplap. 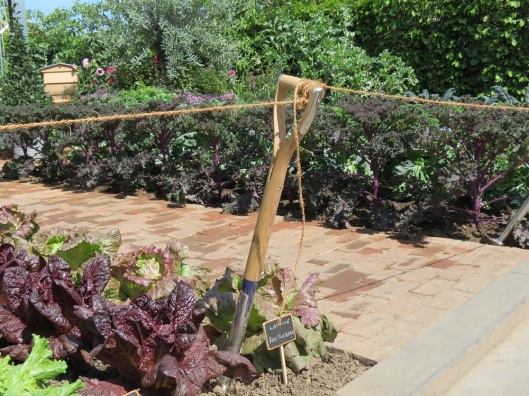 Make fencing out of old garden tools: Simple, but effective. These were ordinary garden forks and spades, sunk into the ground on the Chris Evans Taste Garden, sturdy garden twine threaded through the handles to make a simple rope fence. 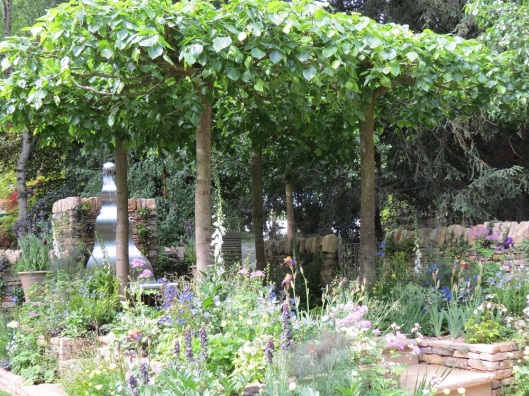 Tabletop tree pruning: Create natural shade and a living pergola by pruning a quadrangle of four trees – here, on the Poetry Lover’s Garden, limes – into a green roof above your head. They’re also known as parasol trees: if you don’t fancy the hassle of shaping them yourself you can buy pre-trained ones.

Do away with your greenhouse frame: These were quite the talking point. I had never realised quite how imposing the frame of a greenhouse could be until I saw a greenhouse without one. These were frameless greenhouses from Pure, and the RHS was impressed, too: they awarded them RHS Chelsea Garden Product of the Year.

Build walls you can read: What a beautiful idea. Here the words were impressions about scents, on the Jo Whiley Scent Garden: but you could carve a poem, favourite saying or quote into your wall for a feature that’s poetic as well as practical.

Oh, I know, the RHS go round handing out big gold medals and stuff. But here are the really important gongs to be had at the RHS Malvern Spring Gardening Show….

The Constant Gardener Awards for Malvern 2012

Somewhere between 100 and 200 years old: gnarled, impossibly ancient, adding instant permanence and making this garden look like it had always been there. 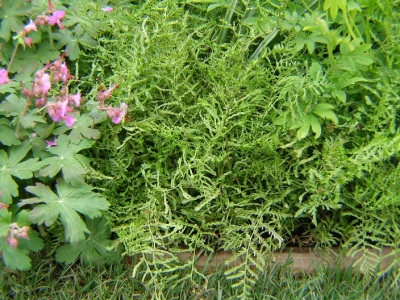 Infinitely understated: no flowers: pretty much a filler. An unlikely candidate for wowing the punters – but this was the little filigree fern on ‘A Place to Reflect’ (Gold and Best in Show) which had everyone who saw it exclaiming how pretty it was. Including me.

Garden I’d Most Like To Take Home:
The Family Garden (Bronze)

Oh all right, the garden my kids would most like me to take home. The planting was a bit iffy, the spacing patchy (I kept wondering if they’d brought enough plants) but oh – just look at that to-die-for hollowed out log. My kids would adore one of those. There were teepees and one of the best ‘water features’ ever…. but more of that in a minute. 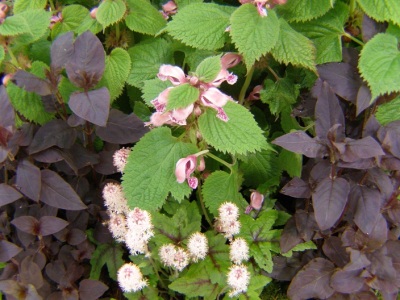 Lysimachia ciliata ‘Firecracker’, Lamium orvata and Tiarella ‘Braveheart’ in a sublime froth of purple and pink.

Most Original Use of Plants:
Umbrageous Places, Painting with Plants Gallery 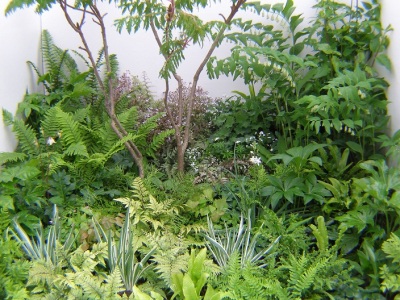 They nicked the idea of recreating paintings with plants from Melissa Jolly’s ‘Picturesque’ at last year’s Hampton Court Flower Show – but if you’re going to nick an idea, this is the one. There were some fantastic interpretations here but the best, for me, was Tanya Batkin’s original take on the Rousseau painting ‘Equatorial Jungle’. It’s a textbook example of a sumptuous woodland planting: Asarum europaeum, Fatsia japonica, half a dozen different ferns, an Epimedium or two and just the right little star of white from Anthericum liliago ‘Major’, all overhung by the filigree foliage of Rhus typhina dissecta. Fabulous. 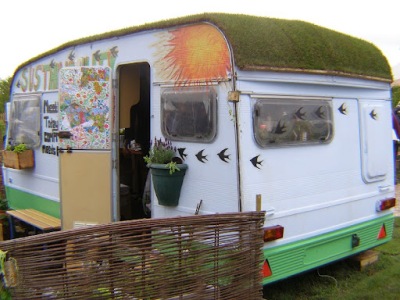 I just adored the idea of a green roof on a caravan. Someone, somewhere, has to do this for real. It could revolutionise the view from campsites forever. 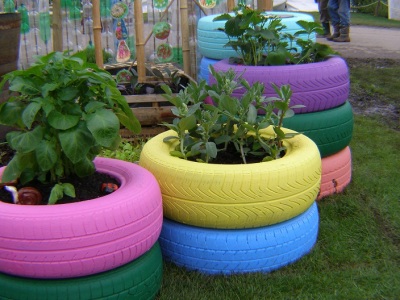 You’ve heard of stacked car tyres as planters, usually with the words ‘potato’ and ‘Bob Flowerdew’ not far behind. And then you’ve shuddered a little and turned away to do something more aesthetically pleasing instead. Well – it’s a good idea, just a little challenging on the attractiveness front: so here’s what the kids at Pitmaston Primary School did with it. Now you’re talking. 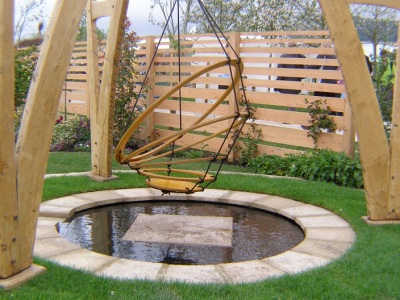 I kept staring in fascination at this rather elegant swing seat in Imogen Cox’s ‘Hasten Slowly’, mostly trying to figure out how it works. Do you sit in it or sort of crouch? Don’t you get embarrassing ridges around the bottom area? Isn’t it back-crunchingly uncomfortable? And how the heck do you get in it without falling in the water? In the end I came to the conclusion that it was an elaborate joke to be played on visitors who fancied themselves wafting around in elegant swing seats. That’ll teach ’em. 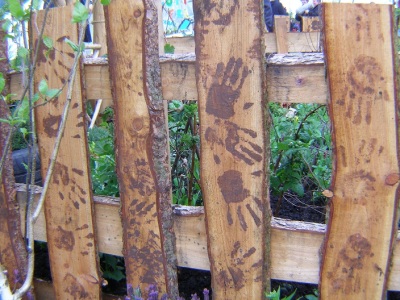 Isn’t this fantastic? I must try it with my girls. The kids at Burlish Park Primary School mixed clay and mud, slapped their hands in it and then made prints all over the slats: elegant, wonderfully personal, and fun at the same time. Lessons were never this much fun when I was at school. 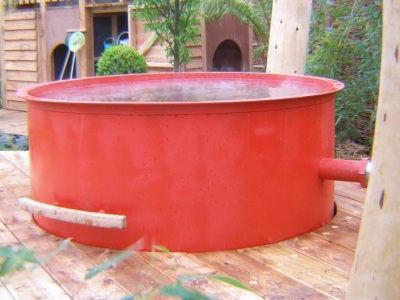 Ooooooohhhhh…. I want one of these. I so want one. This is the water feature of your dreams: a hot tub, in a big metal tank with a tube leading straight out to a wood-fired stove burning merrily in the corner. The surface of the water steams gently, you step up onto the rather lovely wooden platform and ease yourself into the heat of your very own outdoor bath…. mmmm…..

Copper pipe, wound cleverly into a perfect sphere, makes for a mesmerisingly shimmery background to a gentle cascade of water. Ideal if you have small children and don’t want to drown them.

Sculpture of the Year:
Florilegium (Bronze)

The sinuous lines of this shoulder-height etched metal sculpture wove their way through the garden and around the central tree, revealing a new view at each turn. The letters – plant names and sayings, but you could have a poem or song – were cut right through the metal and cast shadows or offered glimpses of what was beyond. Inspired.

Wall of the Year:
A Place to Reflect (Gold)

Bored with brick walls? Here’s one very elegant solution: whoever did that exquisite brickwork in the middle deserves a medal.

Nickable Idea to Take Home:
A Place to Reflect (Gold) 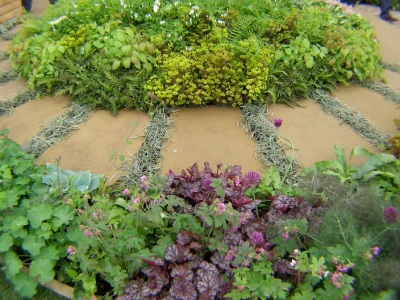 Another one from the show-winning garden, but I’m not apologising: there was a lot to like. I’m a big fan of using plants instead of cement to fill the gaps between paving slabs: I did think my options were limited to creeping thyme or chamomile, or maybe pennyroyal or Soleirolia soleirolii if you’re feeling brave. But this is Opiophogon ‘Little Tabby’: altogether more original.

Look a bit like box lollipops, don’t they. But no: they’re actually olives, pinched out to make standards and clipped into neat balls. And they even fruit. The guys at Villagio Verde, olive specialists and with Alchemy Gardens the ones who created the garden, say they’re flying off the shelves: you can see why.

Imagine the thought processes you must go through to look at a cow pat and think, ‘Hey, now there’s a fantastic commercial opportunity, right there.’ And – even more amazing – actually pick the thing up and turn it into something useful. In this case, a biodegradable pot which feeds your plants as it breaks down: it won product of the year, understandably.

The ‘Trying Too Hard’ Award:
Diapason of Colour (Silver)

This garden name-dropped Pythagoras, Plato, Newton and Goethe, almost in the same sentence, in its description of what it was all about. There was talk of the ‘law of the octave’, the visible light spectrum and string theory. I’m sure it’s very clever but… eh? Still, it was a nice garden. I liked the swirly metallic sculptures curving across the changing levels (wavelength relationships, apparently). A diapason, incidentally, is the interval in Pythagorean tuning, sometimes also used to group the flue pipes in an organ. See what I mean?

I’ve said it before, and I’ll say it again: sometimes breeders should just stop. Right there. Before it gets ugly. Who is it who came up with the idea that lime-green and brown leaves would look good topped with coral pink flowers? And could they stop it please? Now? 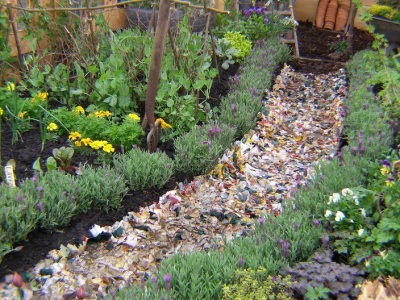 This may look like a path: but it’s actually a rag rug, an idea so off the wall it’s actually rather good. You can just see all those acres of allotments cheered up no end by people ripping up their old clothing and turning it into a good, thick, weed-suppressing path covering. Inspired.

Yes: that is a toaster. Actually it wasn’t the most bizarre in the little hummock of oddities that was the Extreme Gardening challenge: there were teapots and socks and handbags and a football and an old toy car and an upturned umbrella: a little disturbingly, one person had cut the top off a large plastic doll’s head and planted into that. The imagination of gardeners is a wonderful, and sometimes rather unsettlingly odd thing.