Summertime… and the watering is endless….

Every day I am to be found in the greenhouses behind a hose – possibly my least favourite job in the garden. Ah well, I can’t be doing the fun stuff all the time.

It’s a good time, though, to take time just standing and looking at my plants (after all, there’s not much else you can do). Stand staring for a while and you’ll spot that early outbreak of aphids, or the yellow mottling that signals the start of red spider mite. And the earlier you spot trouble, the sooner you can head it off.

In this greenhouse – the cucumber greenhouse this year, which means there are also cucamelons, peppers and an aubergine or two in here, plus an almost-finished pot of mixed salad which really needs to go outdoors – I’ve also been peering at the weed seedlings and noticicing that several are actually self-seeded French marigolds, left over from last year when I underplanted the tomatoes in here with them.

This is very gratifying, as it means a) my tardiness with the weeding has paid off and b) French marigolds can self seed – who knew?! Saves me a lot of time faffing about with seed trays and propagators – all I have to do is leave the heads on to set seed and I’m done.

The cucumbers are in full production now: and that means I’m in the middle of my annual cucumber glut. I’m picking one or two a day at the moment, far more than we can possibly eat. The plan is to slice and pickle them instead of gherkins (which have – again – been an abject failure this year): must find a recipe.

And in Greenhouse no. 2 the tomatoes are at last really getting going: I planted them out far too late this year after getting distracted just when I should have been clearing the shelving, late-sown seedlings and containers out, so they hung around in pots much longer than they should have. Just green fruits so far but all looking promising.

These are heritage varieties, and rather special ones at that: they’re from a little packet of treasure sent me by the chap who looks after the 103-variety-strong heritage tomato collection at Knightshayes in Devon. On the right are ‘White Beauty’, aka ‘Snowball’ – a hefty white beefsteak; on the left, ‘Sutton’s Everyday’ which sound nice and reliable; and at the end ‘Jersey Sunrise’ which I’m promised offers exceptional flavour. There are about a dozen other varieties in the package I’m intending to work my way through over the next few years. 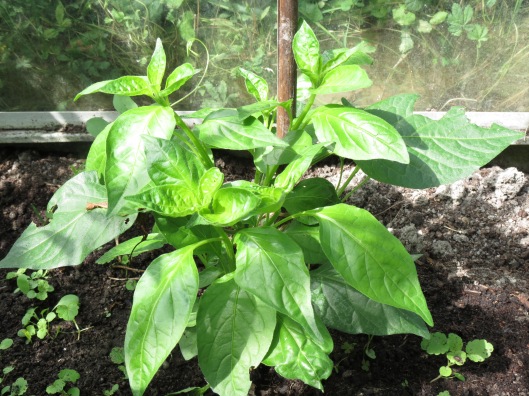 And I couldn’t possibly sign off without mentioning the newest arrival in this side. Over winter I lost my beloved rocoto chilli – it was coming into its fourth year, and last year was so vigorous and enormous it hit the ceiling of the greenhouse and I needed to construct a support frame for it out of 2×1 roofing battens to stop it muscling out the plants around it. Covered in lipstick-scarlet fruits, so many I gave them to family and friends and still had bags left over in the freezer, it was my pride and joy.

I hadn’t done anything particularly different from the previous three years, so I’m thinking that rocotos (also known as tree chillies) are actually just naturally short-lived and don’t last much longer than three or four years.

Anyway, there’s no problem that doesn’t also offer an opportunity: so I took the chance to ring the changes and try another chilli you’re supposed to be able to overwinter. Introducing my Aji chilli: aka Capsicum baccatum and another of the slightly hardier, earlier fruiting varieties. This one has yellow fruits, much more like cayenne types in that they’re thin-skinned, so I should be able to dry them (unlike rocotos which are too fleshy) and also not quite as hot as the tongue-blistering fruits on my lost plant.

As before, I’ve planted it in the greenhouse border; as before, I’m expecting it to reach a spectacular height and generally become a bit of a talking point. Watch this space!