I love visiting summer gardens in the winter. Those which will let you in the gates at this time of the year are in the minority, but if you can find one, you will find a garden out of its vibrant, party-animal summer finery. You might even say you can never truly know a garden’s character until you have seen it in winter. 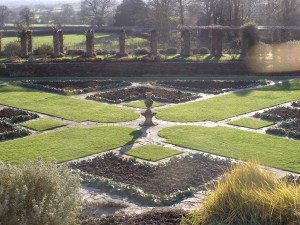 The Edwardian Garden at Hestercombe: a masterpiece of garden structure

Gardens in winter are quieter, more reflective. They show off less: there’s less ‘look at me!’ competition and though high points are fewer and more subtle, there is so little else around at this time of year that you’re inordinately grateful for a cluster of flowers, a scent, a shaft of sunshine glancing off snow-white bark. Each highlight, however small, takes on a significance which summer flowers can struggle to achieve.

The scent of wintersweet (Chimonanthes praecox) hung heavy on the air, trapped in the intimacy of the Victorian terrace 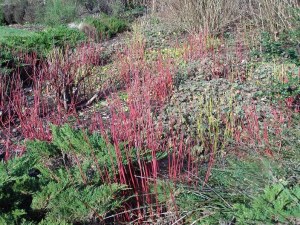 Bark is just one of the things unnoticed in summmer but showing its true beauty in winter: here a bank of dogwoods (there were silver birch behind, too)

We were at a loose end on Saturday and it was – miracle! – a gloriously sunny day, so as staying in was simply not an option and the gardens at nearby Hestercombe are free all through January and February, off we went. 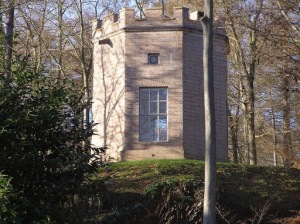 They did pointless buildings so well in Victorian times, didn’t they? 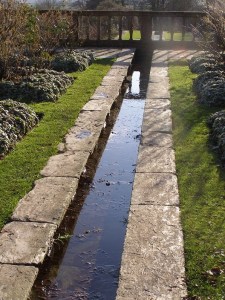 They weren’t too bad at rills, either…

Hestercombe is one of those great restoration stories, in a similar vein to Aberglasney and Heligan. The original garden dates back to 1750, and there’s a second terrace in fine Victorian style: but its finest moment was when one Edwin Lutyens moved in just as the 20th century began to create the Edwardian Garden, a tour de force of symmetry, grandeur and beautifully-judged stonework sweeping out from the front of the house towards a fine view of my house in the Blackdown Hills. Oh all right, you can’t quite see my house from the back garden of Hestercombe, but it’s there somewhere (and was when Mr Lutyens was at work, too). 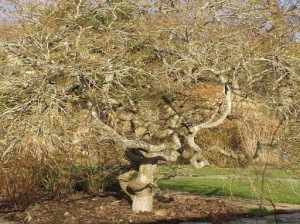 He was followed shortly after by the redoubtable Gertrude Jekyll who did the planting. The whole lot amounts to some 35 acres, and it must have been utterly breathtaking for all of twenty years – until the World Wars came along. After that the story is drearily familiar: army barracks, garden staff whittled down to two harried souls: trees felled randomly or left to grow where they shouldn’t. Finally it was completely abandoned.

Then in the 1970s, planting plans were found in a potting shed: more exploration revealed a disused waterfall, the ruins of garden buildings and follies including an 18th century water mill. Some helpfully detailed paintings surfaced of the garden as it was in the 18th century by its original owner, a landscape architect by the rather wonderful name of Copplestone Warre Bampfylde: and the restoration was under way.

These figs were wonderfully trained against a sunny wall: tiny fruits were dotted here and there on the branches

With generous funding from the National Lottery work began in earnest in 1995 and it’s still going on: there are half-rebuilt ruins and bits of ground with no obvious purpose here and there around the edges. But the majority of the garden has emerged triumphant, a paean to the Victorian sense of occasion: sweeping vistas and grand statuary give way to intimate terraces, rills trickle playfully and all pay homage to the majestic view spreading out like some amphitheatre at your feet.

The craftsmanship is superb, with lovely craggy stone holding back the banks of grassy hillside and archways framing paths laid with the precision of an artist. Alot of it is all looking quite ‘new’ still: and perhaps that steals a little of the sense of history. But as the moss and the lichen creeps its way in, it will settle into its landscape once again, no doubt. I hope I shall be here to see it.

Let me take you along a rain-slick path into a hidden garden of dripping ferns, towering leaves and vividly coloured blooms. It’s raining, of course (we are in Northumberland, after all) but the garden is glistening and jungle-like: proof, if proof were needed, that a misty drizzle is every bit as romantic as sunshine. This was my discovery of the week.

Bide-a-Wee Cottage and its delightful nursery, near Morpeth in Northumberland, is open from May to August, on Wednesdays and Saturday afternoons only. I’m told that June, when the Himalayan lilies are in flower, is the best month to go. If you can’t get there – they have a pretty fabby online mail order service, too.

Sometimes all this dampness is a lovely thing. I went to visit the gardens of Heale House in Wiltshire last weekend – not too many miles away from VP (I waved in your general direction!) in Wiltshire.

It was one of those misty mornings where the sun slants through from time to time with that veil-like effect that’s so magically romantic. This was probably not the best time of year to see Heale House – it’s a spring garden, mainly. But I was truly inspired by the kitchen garden, which was at full pelt. There’s a fab nursery attached, too, run by trillium specialist Kevin Hughes – well worth going out of your way to visit.

The gorgeous house is off limits – I did want to take a closer look at that rather elegant-looking private garden in front of it, though. 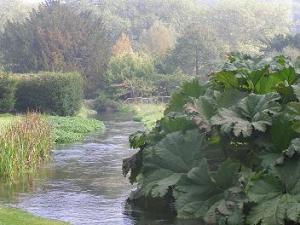 It’s quite a watery garden – the Wylye river (I think it’s called) runs through the grounds and meanders quite charmingly through the planting with multiple little bridges to cross.

But the kitchen garden really stole the show. It’s divided by these wonderful ancient apple cordons trained over arching tunnels.

The tunnels are underplanted with woodlanders – there was an oak-leaf hydrangea in full flower at the end of this section.

I liked the way they mixed ornamentals with the fruit and veg – here fluffy moppets of santolina next to the bean supports.

I thought this was a great idea, too – cordon pears trained over a framework to create a truly lovely and intimate little arbour.

More mixed planting – this time cosmos with the artichokes, and as you can see they’re just trying to establish some box for a more formal definition to the beds.

Lots of inspiration there – I’m introducing some edible planting into my own garden next year, and it just goes to show it doesn’t have to be either/or. I just wish I had the Victorian walls on three sides, plus the half-acre or so of land that they have to play with here…

I started my new college course this week.

It’s the Plants and Plant Design course, run by Capel Manor College – and I’m told they’re the only ones in the country who do a course focussing solely on designing with plants (rather than general garden design, which in most colleges means a lot of stuff about paving slabs). It’s one half of their full diploma course – the other half being their “Principles and Practice” garden design course, which at the moment anyway I don’t think I shall take as I don’t really want to be a garden designer. That’s tantamount to heresy in some quarters, it seems, and I may yet see the error of my ways and change my mind, but right now I just want to learn about plants.

The first day was pretty much an orientation session – working out what we’re going to do and when, where the library is, all that kind of stuff. We were initiated into the arcane science of plant idents – something I do day-to-day in my normal job, but not something which I’ve had to do formally before. This week it’s Deschampsia cespitosa ‘Goldtau’, a couple of Persicarias, a Sedum and a rather floppy-looking Achillea (‘Summerwine’ if my memory serves me right). Plant names aren’t usually a problem for me, but remembering all their various habits, sizes, tics and quirks is a bit more challenging – unfortunately the plants are chosen for you, or I’d use the opportunity to learn a whole load of plants I don’t already know!

The course syllabus includes a visit to Great Dixter, another to Beth Chatto’s, and a third to – get this – the Netherlands to visit some of the iconic gardens they have there (unfortunately not Piet Oudolf’s, but fortunately Het Loo which is somewhere I’ve wanted to go for a very, very long time). Now this is my kind of school lesson!

Just sometimes you meet a truly, truly memorable plant. The kind of plant you just know you’ll think about for the rest of your life, in an “oh yeah… now that was amazing” sort of way.

This happened to me last week, while on holiday in Cornwall (of which much more later). The plant in question was a Michelia doltsopa in Caerhays – a fabulous garden, with a National Collection of magnolias and their close relatives, which include the Michelia family.

Now, I discovered while doing a bit of research for a recent article that this not-very-commonly-grown tree is causing some excitement in magnolia-growing circles (not very mainstream, admittedly) – since one of its close relatives (M. yunnanensis) in the process of being recategorised as a magnolia. Well – all I can say is, you might think magnolias are spectacular – but cop a load of this.

(my eight-year-old doesn’t much like having her photo taken)… and every single one of those millions of flowers looked something like this: 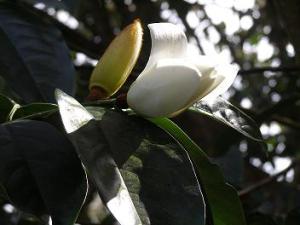 You could walk right inside the tree, and in the centre, too, this was a magical, architectural, unforgettable plant:

And as if all that wasn’t enough, the whole thing was scented – a rich, musky, sultry scent that went right to your head. Magnolia fans – eat your hearts out.