Lupins coming along nicely in the cutting garden…

It is June! Not very flaming, so far, but very busy. Here’s what I’ll be up to:

Making comfrey tea: the first harvest from my comfrey patch is in and stuffed unceremoniously into a bucket. Six weeks and a lot of whiffiness later I’ll have potassium-rich home made fertiliser.

Tying up peas: Why is it that just when you think you’ve tied in the last pea plant another tendril makes a bid for freedom? I am getting very good at tying knots… 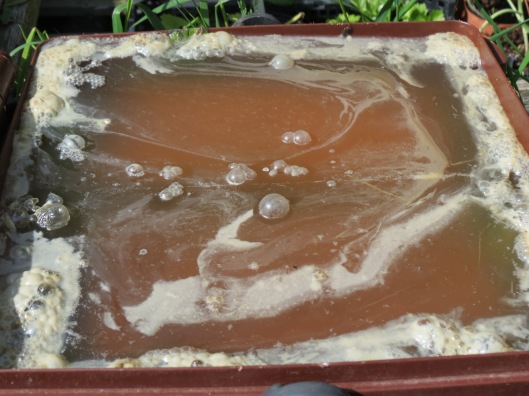 Mmm…. comfrey tea stewing away (the bricks you can see just under the surface were above water yesterday)

Planting up the greenhouses: cucumbers and cucamelons in, tomatoes still waiting for the shelving-and-propagator setup to be dismantled

Fretting about my quince tree: it has developed worrying signs of quince leaf blight. It looks just like tomato or potato blight in that lots of brown blotches start spreading across the leaves. There is no defence bar picking off affected leaves – and that means nearly every leaf on the tree. And it’s a big tree. 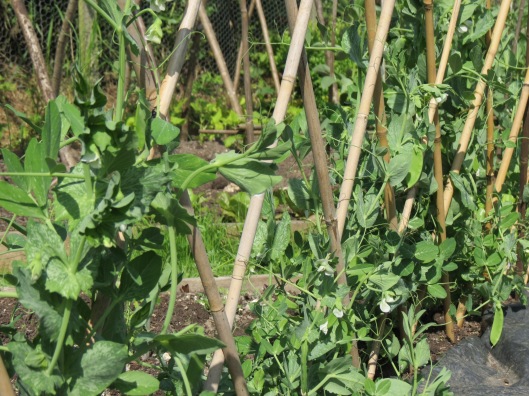 Harvesting asparagus: one of the best crops of the year. The spears are still largely spindly – the plants are in their third year – but I’m now getting some promisingly fat ones, too.

Planting up the brassica beds: slightly belatedly, as the calabrese have been fretting at their pots for weeks, but everything is now ready to go out under insect-proof mesh (I have already spotted at least two cabbage whites on the wing).

Netting the gooseberries: an enterprising blackbird found its way under the bushes last year and snaffled every last berry, but this year I’m a step ahead. I don’t think I’ve ever had to net gooseberries before – far too prickly for birds to bother with – but it’s my guess that growing them as cordons as I do might make them easier to pick for other enterprising creatures as well as me…