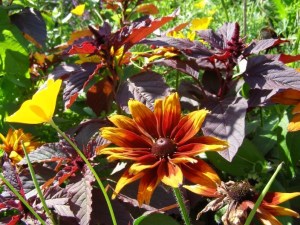 This was a bit of a discovery this year: I’ve grown the droopy Amaranthus caudatus many times, both the species and ‘Viridis’ which is an elegant shade of green, but they tend to be quite difficult to shoehorn into a mixed border, being one of those shapes that demands a space all its own. So then I was given a packet of seed for this variety last spring, and since I hadn’t got round to buying my usual Amaranthus, I bunged these in instead.

The species is the key: they’re a paniculatus, not caudatus, and this means they’re upright. And I do mean very upright: they’re currently marching through my borders like so many purple soldiers, waving those plum-coloured pipecleaners aloft: sometimes straight upwards in tufts like eccentric feather dusters, and at other times sending up individual spires which twist bewitchingly in all directions. 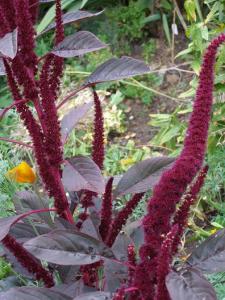 The extraordinary thing for something with such chutzpah of its own is that it goes with absolutely everything. I’ve got one patch next to some dahlias – that purple foliage is almost indistinguishable from that of a purple-leaved dahlia from a short distance, so they blend in perfectly and make excellent partners. Sadly the dahlias are having a little break from flowering at the moment – pesky earwigs – but I have one which is a pale pink-tinged white above purple leaves which looks fabulous with the amaranthus, like white dinnerplates among volcanic plumes of purple smoke.

In the same border are pink cosmos, made all the more frilly and feminine by all that brooding purple, and vivid orange Californian poppies which scramble around under their purple skirts with true pizazz. Actually I haven’t found a single thing they clash with so far. I’m a total convert: must sow more next year…